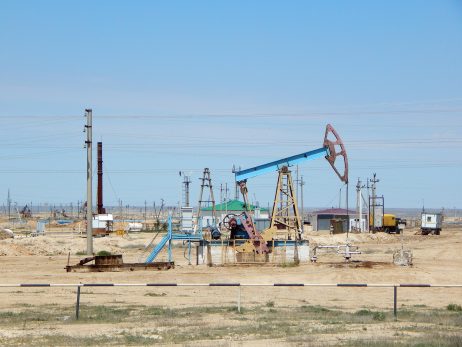 Much of the oil produced in Kazakhstan transits through a pipeline across Russia, which now has shrunk output for a variety of reasons.

After the Russian government started a war in Ukraine in late February, an oil pipeline came into the spotlight. With sanctions looming, producers, shareholders, and traders linked to the Caspian Pipeline Consortium (CPC) that pumps oil from Kazakhstan to global customers in the West became wary of a potential backlash. This week, inclement weather and ongoing repairs at its facilities further doomed the pipeline’s future, at least in the short term.

On March 24, Nikolai Gorban, the general director of the CPC, said that the company would halt loading at their marine terminal at Novorossiysk, a Russian port on the Black Sea.

On the same day, Kazakh Energy Minister Bolat Akchukalov said that a potential rerouting away from CPC would be “difficult to accomplish quickly.”

Days earlier, the CPC announced the need for repairs of its infrastructure, which was damaged during a storm, and the temporary decommissioning of one of its mooring structures.

Running 1,500 km from the northwestern Atyrau province in Kazakhstan across southern Russia, the CPC has a daily capacity of 1.4 million barrels, about 2.5 percent of global seaborne oil trade. It was expanded through gigantic investments over the past decade.

When it was first built in 2001, the CPC represented the first viable outlet for Kazakhstan’s oil outside the Soviet-era infrastructure (discounting the occasional oil swaps with Iran). Now, it transports two-thirds of Kazakhstan’s oil exports. That’s around 40 percent of Kazakhstan’s total exports. Since the early 2000s, Kazakhstan has also built a major pipeline to China, but the bulk of the oil extracted in its western fields of Tengiz, Karachaganak, and Kashagan, along with other smaller fields, feeds the CPC.

Importantly, this establishes a connection between pipeline ownership and oil exports.

In fact, U.S. corporation Chevron owns a 50 percent stake in the Tengizchevroil venture that exploits Tengiz, an 18 percent share in the Netherlands-based Karachaganak Petroleum Operating BV (KPO) consortium that extracts gas and condensate at Karachaganak, and a 15 percent stake in CPC, via a subsidiary registered in Almaty, Kazakhstan’s so-called business capital.

Italy’s ENI also owns a 16.8 percent stake in Kashagan, through the Netherlands-based subsidiary Agip Caspian Sea BV, and a 29.25 percent share in KPO (via Agip Karachaganak BV, also located in Amsterdam). In addition, it owns a 2 percent share in the CPC via a Luxembourg-registered subsidiary (Eni International NA).

Headquartered in London, Shell controls a 16.8 percent share in the Kashagan consortium (via Netherlands-based Shell Kazakhstan Development BV), as well as a 29.25 percent in KPO. Shell also owns 49 percent in Rosneft-Shell Caspian Ventures Limited, a Cyprus-registered company, majority-owned by the Russian state-controlled oil enterprise. The venture owns a 7.5 percent stake in CPC.

Given the Russian participation in the CPC shareholding structure, once the Kremlin launched its military offensive against Ukraine, and several Western countries responded with sanctions, traders became wary of buying oil from the CPC, as it could become subject to sanctions.

On March 18, the U.S. Treasury Department told oil traders to “exercise caution if they have a reason to believe such certificate [provided by the CPC ensuring that their oil is not of Russian origin] has been falsified.” In an earlier note, the Treasury Department had given a green light to CPC oil, as the pipeline could effectively segregate Russian oil, under U.S. sanctions due to the war in Ukraine.

Historically, around 8 percent of the oil transported via the CPC originates from Russia.

The war could also have an impact on oil pumped via the CPC from Karachaganak, as the KPO consortium also features Russia’s private oil company Lukoil, which owns a 13.5 percent stake via Netherlands-registered LUKOIL Overseas Karachaganak BV. Through the joint venture LukArco, Lukoil also owns a 5 percent stake in Tengizchevroil and a 12.5 percent stake in the CPC. While the effects of sanctions on privately-owned Lukoil are difficult to predict, oil extracted and sold by Russian shareholders could become increasingly toxic for the market.

The potential disruption to the CPC could last anywhere between a few weeks and two months and cut output by around 1 million barrels per day, effectively incapacitating a vital export route for Kazakhstan.

“Russia can make it very difficult for repairs to occur given the challenges it’s currently facing to sell its own oil,” Amrita Sen, chief oil analyst at Energy Aspects told the FT. Yet, Groban, the CPC director, told Reuters that “foreign suppliers have stopped deliveries of spare parts for the damaged facilities,” possibly due to sanctions, which could stretch the period of repair.

Should the dwindling oil throughput last beyond a critical point, extractive companies operating in Kazakhstan will scramble to find other options, not an easy task given that Kazakhstan is a landlocked country and most of its export routes go through Russia.