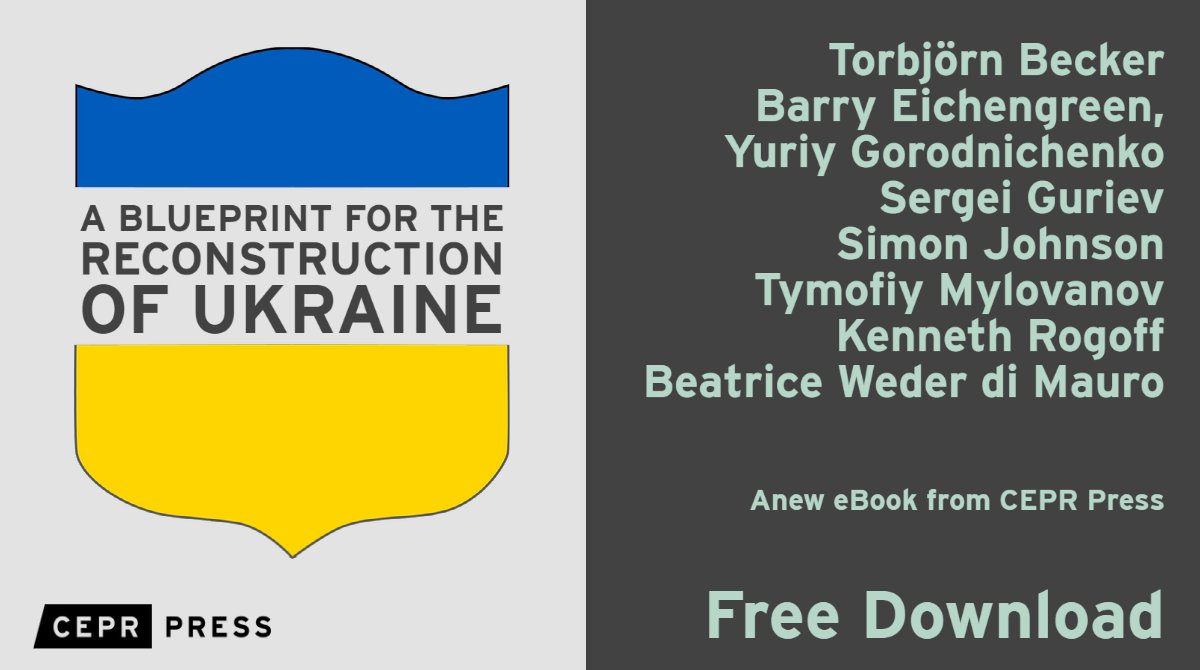 The scale of destruction in Ukraine is already staggering. A new CEPR publication builds on prior experiences with reconstruction following both wars and natural disasters to outline some principles for the future reconstruction of Ukraine. Efforts should include putting the country on the path to EU accession; establishing a stand-alone EU-authorised agency with autonomy to coordinate and manage aid and reconstruction programmes; recognising that Ukraine must own its reconstruction; encouraging inflows of foreign capital and technology transfers; a focus on grants rather than loans; and rebuilding around the principle of a zero-carbon future.

On 24 February 2022, Russia invaded Ukraine. Thousands of civilians have been killed; millions of people have been displaced (Frattini and Solmone 2022), including 2 million children displaced outside of Ukraine; and the scale of destruction in the country is already staggering. The General Assembly of the United Nations has condemned Russia’s war of aggression in Ukraine.

Although the outcome of the war is uncertain, one can start thinking about the future reconstruction of Ukraine. In a new eBook, part of CEPR’s Rapid Response Economics series, we outline ideas for the design and requirements of this effort (Becker et al. 2022). We build on prior experiences with postwar reconstruction (e.g. the Marshall Plan after WWII, the reunification of Germany, and the reconstruction of Iraq and Afghanistan) and reconstruction following natural disasters.

In a first step, we review the current situation in Ukraine. In short, the economy has experienced a large negative shock, with GDP contracting by at least 30%. Despite the massive economic disruption and mounting fiscal challenges, government functions are largely operational. Ukrainians have a strong sense of common purpose and unity. Given the level of economic development and proximity to the EU, after hostilities end, Ukraine will likely resemble Europe after WWII rather than Iraq or Afghanistan in 2002/03.

Multiple countries and international institutions have pledged to support the reconstruction of Ukraine. This support is highly diverse and ranges from bilateral aid to help from multilateral institutions (e.g. the World Bank) to support via private sources (Ukrainian diaspora, charities, individuals, and businesses). There is a discussion of using seized Russian assets as well as ongoing revenue from Russian energy to pay for reconstruction and compensation (e.g. Tsyrennikov 2022).

We argue that international aid for reconstruction efforts should be based on the following principles to ensure the success of Ukraine in the long run. First, Ukraine should be on the path to EU accession to provide a strong incentive for the country to reform and modernise itself.  Second, aid should be rapid to ensure that it is received in the critical early post-war period, when Ukraine does not have its own resources. However, aid should also be conditional to ensure that money is well spent and that it directs reconstruction towards using best practices, which includes efforts to radically reduce corruption. Third, the aid should be based on grants rather than loans to avoid debt-sustainability issues in the future. Fourth, it is critical to coordinate across funding sources to avoid waste, delays, and duplication. Fifth, reconstruction offers a unique opportunity to radically upgrade Ukraine’s productive capacity to bring it close to the technological frontier (including green technologies), lay foundations for long-term growth, and integrate Ukraine even more tightly into the global economy. Aid should be focused on increasing the productivity capacity of the economy and stimulating a high investment rate (e.g. on new machinery/equipment, infrastructure, training/human capital, technical assistance, etc.), as well as through strengthening human capital. Finally, because aid will be effective only if it is aligned with Ukraine’s interests, Ukraine must ‘own’ its reconstruction.

Building on these principles, we propose that aid should be administered by a self-standing, EU-affiliated or authorised agency independent of, but accountable to, multilateral, bilateral, and non-governmental donors. This agency may be similar to the Economic Cooperation Administration that administered the Marshal Plan. Establishing a new EU-affiliated agency will help to avoid mission drift, minimise bureaucracy and inertia of existing institutions, minimise political influence (for example, Russia is a shareholder in the IMF, the World Bank, and European Bank for Reconstruction and Development), avoid donor-driven reconstruction, and attract a fresh, motivated and high-morale cadre. This agency should have significant autonomy in decision making to minimise political influence and maintain flexibility in an uncertain, fluid, and complex environment. The Economic Cooperation Administration was established as a self-standing agency of the US government rather than embedded within the State or Treasury Departments precisely in order to streamline hiring and operations.

As we discuss in the brief, the design of the agency should include a number of critical elements. For example, a pre-determined, multi-year lifespan of the agency will allow for multi-year capital programmes, efficient budgeting, clustering of complementary programmes (e.g. coal, chemicals, and metallurgy), and funding of infrastructure capital programmes, while making the programme more politically palatable to donor countries and institutions. A stable structure is needed to avoid reconstruction fatigue. Aid programmes with uncertain horizons (such as the UN Relief and Rehabilitation Administration after WWII and the Afghanistan Reconstruction Trust Fund) have proved less effective. To ensure that Ukraine owns the reconstruction, we propose using joint planning and decision making, matching funds, decentralisation programmes.

Then, we argue that the reconstruction should include three distinct phases: i) emergency response (akin to the response to a natural disaster hitting a country); ii) rapid restoration of critical infrastructure and services to revive the basic functions of the economy and the government; and iii) laying foundations for a rapid, sustained growth trajectory. Each of these stages has different objectives, constraints, and tools. For example, the second phase should include robust macroeconomic stabilisation to ensure that market-based mechanisms can start to allocate resources in the post-war economy.

The third phase is particularly important for the success of the reconstruction. The overarching objective of this phase is to radically upgrade the institutional environment. We suggest that EU accession is critical for institutional reforms that aim to address Ukraine’s chronic problems such as corruption, weak governance, concentration of economic power, and so on.  The reconstruction in this phase offers Ukraine an opportunity to leapfrog technologically. The most obvious possibility is to create a carbon-free economy, both as a way to coordinate on investments for the future but also to show how to reduce reliance on fossil fuels as much as possible. Whole cities – including Kharkiv, Mariupol and Chernihiv – will need to be rebuilt, and this represents a ‘build back better’ opportunity to utilise modern technologies (especially energy efficiency), designs, and urban planning (for example, public transportation should adopt electric buses, redesigned tram lines, and so on). By using international aid to create favourable conditions (including the prospect of joining the EU), Ukraine can become an attractive destination for foreign direct investment, which will accelerate the recovery and further integration of Ukraine into the global economy.

Finally, we provide tentative estimates for the reconstruction cost and benchmark these estimates against previous reconstruction efforts. After just over a month of war, the required assistance from Europe and others already likely ranges from €200 billion to €500 billion, which is comparable to the scale of aid offered in the past. However, the cost of reconstruction increases with every additional day of the war and at any increasing rate, as people spend more time away from their homes, children become more traumatised and private sector companies disintegrate.