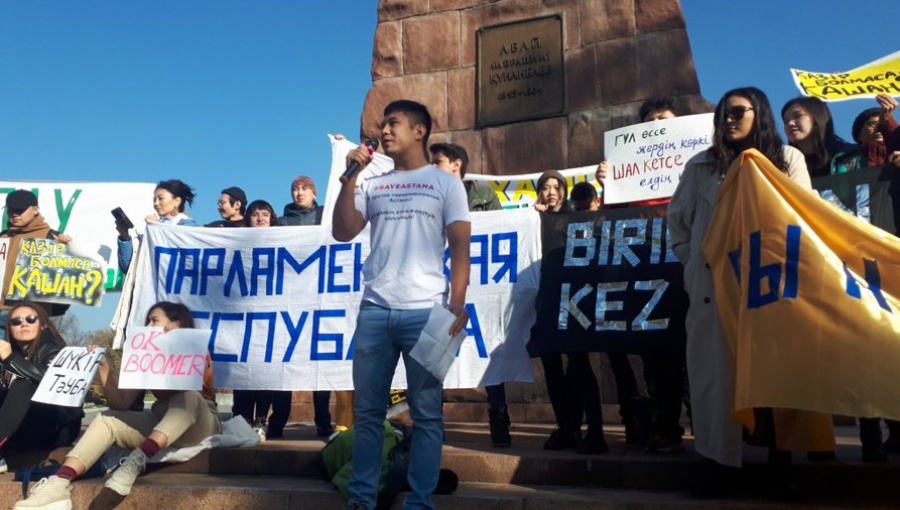 One of the more remarkable occurrences in Central Asian politics this year was the sight of thousands of Kazakhs taking to the streets to protest at the shoo-in, far from democratic election of longtime president Nursultan Nazarbayev’s handpicked successor Kasym-Zhomart Tokayev in early June.

Since then the “awakening” in Kazakhstan has continued with enough people getting the demonstrations bug to produce a series of unauthorised protests to keep the authorities uneasy.

Anxious not to mar the country’s carefully groomed image as a stable and modern place for foreign investors to do business, officials have been working on subtle ways of getting the genie back in the bottle.

One approach has been to grant permission for a certain amount of pro-democracy demonstrations that, with careful management and assessments of the trouble-making potential of those involved, can be trusted to not get out of hand. Another method has concentrated on containing internet freedom in Kazakhstan—the trouble is that the techniques adopted here have actually proved pretty obvious and heavy-handed, and that has been brought home by a new study from Washington-based NGO Freedom House.

On November 4, the watchdog said in its latest Freedom Of The Net annual report that Kazakhstan, along with Sudan and Brazil and other countries, has seen the worst deterioration in internet liberty over the past year.

Freedom House said that “internet freedom in Kazakhstan deteriorated markedly during the coverage period [of the assessment]”.

During the coverage period, namely from June 1, 2018 to May 31, 2019, according to the report “mobile internet connections were repeatedly throttled or disabled altogether in an apparent attempt to prevent political protests. In addition, social media platforms, notably Facebook, were throttled or blocked outright during live-streamed addresses by exiled dissident and former business magnate Mukhtar Ablyazov and at other sensitive political moments, such as Nazarbayev’s surprise resignation as president in March 2019. The throttling of social media has been common in recent years, but the episodes are typically localized or brief, allowing the platforms to remain important forums for online discussion”.

The analysis added: “On May 9, 2019, the country experienced its most extensive network disruptions in recent memory in anticipation of antigovernment protests. Mobile internet connections were disabled in major cities, and all popular platforms were blocked, as were several independent news sites. Localized mobile internet disruptions were also reported in Almaty on May 1, during a protest organized by Ablyazov’s banned DVK [Democratic Choice of Kazakhstan] party, and in Nur-Sultan (the capital city known as Astana until it was renamed in honor of Nazarbayev in March 2019) on May 16, during an international conference that was disrupted by protesters.

“Networks were later suspended during and after Kazakhstan’s snap presidential election on June 9, 2019, beyond the coverage period. Mobile service providers conceded that their services had been disrupted but denied responsibility.”

Suspending networks “at will”

A number of legal and other mechanisms allow the government in Kazakhstan to suspend telecommunications networks at will, Freedom House noted.

“The government centralizes internet infrastructure in a way that facilitates control of content and surveillance. State-owned Kazakhtelecom, through its operations and a number of subsidiaries, holds a de facto monopoly on the country’s backbone internet infrastructure,” the report added. “The NSC’s [National Security Council’s] supervision of the STS [State Technical Service] allows it to oversee peering centers and cross-border connections. Kazakhstan’s Law on Communication was amended in 2017 to make the management of cross-border internet exchange points (IXPs) a state monopoly in the name of ‘information security.’ In February 2019, KazNIC, the nonprofit registry for the country’s .kz domain, announced the launch of an independent IXP, but it offers peering only of domestic, not international, traffic.”

“Many governments are finding that on social media, propaganda works better than censorship,” Mike Abramowitz, president of Freedom House, said in a statement accompanying the annual report.

The list of key developments in the study’s coverage period was given as follows by Freedom House:

In July, internet service providers (ISPs) based in Kazakhstan were instructed to force users to install a government-issued root certificate on devices to allow agencies to intercept web traffic. The encryption-busting Qaznet Trust Certificate, which allows authorities to read anything a user types or posts using browsers, including account information and passwords, was launched in Nur-Sultan in what officials described as a test run.

Early in August, the authorities said they were done testing Qaznet and posted instructions for uninstalling the certificate. However, it is unclear whether the government has halted the process in response to international condemnations of their move or simply intends to use the certificate during selective events to crack down on protests before they are organised.

Mozilla and Google issued a joint statement on November 3 stating that “the companies have deployed technical solutions within Firefox and Chrome to block the Kazakhstan government‘s ability to intercept Internet traffic within the country.” Each company is deploying “a technical solution unique to its browser,” they said.

While Kazakhstan has halted the use of the certificate, the browser makers' actions will help protect users who have already installed the certificate or prevent the certificate’s future use by the Central Asian nation‘s government. Google, Mozilla and Apple previously introduced some measures to block the certificate in August, but the new statement appears to suggest that the measures have been expanded.

The Freedom Of The Net report also observed that Kazakhstan’s Ministry of Information and Social Development has been developing an “Automated System of Monitoring the National Information Space” to uncover illegal content online since 2017, although the system was not yet in use during the study coverage period. For activists determined to keep the momentum of the country’s new wave of protests going, it looks like they have a big battle on their hands, perhaps more offline than on.