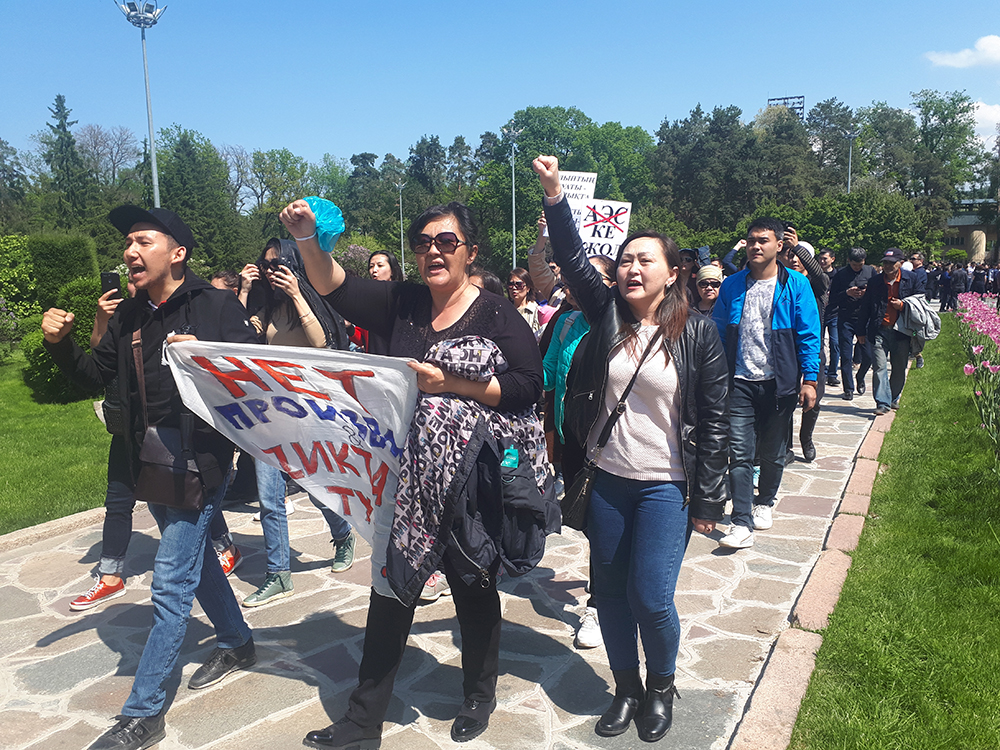 Frustrations have been bolstered by perceptions that crucial national decisions are being made without the general population being consulted.

Peaceful anti-government demonstrations in a few major cities in Kazakhstan culminated on May 1 with detentions and isolated cases of aggressive crowd-control tactics by the police.

Many hundreds of people came onto the streets in cities like Almaty and Nur-Sultan to voice their generalized discontent, braving the draconian rules imposed by the authorities against unauthorized political gatherings.

“Let’s unite! We are the people! I’m not afraid to speak out, I’m afraid to be silent!” one woman shouted through a loud-hailer while holding a toddler by the hand at Almaty’s Gorky Park.

This wave of frustration has been triggered by perceptions that crucial national decisions are being made without the views of the general population being considered.

Following the shock resignation of long-time President Nursultan Nazarbayev in March, Kazakhstan is going to the polls on June 9. The interim president, Kassym-Zhomart Tokayev, who was handpicked by Nazarbayev, will in all certainty win the vote in a landslide.

If officials in Nur-Sultan had hoped this choreographed process would go ahead without complaint, they will be sorely disappointed. On April 21, a pair of activists unfurled a banner carrying the words “You cannot run from the truth” and the hashtags #forafairelection and #Ihaveachoice on the sidelines of a marathon. It was a small gesture of defiance, but enough to spook the authorities. The two activists who carried out the stunt, Asya Tulesova and Beibaris Tolymbekov, were each handed 15-day jail sentences.

Participants of the Almaty demonstration made clear allusion to Tulesova and Tolymbekov’s rallying call.

“We have a choice!” the Gorky Park protesters chanted frequently. 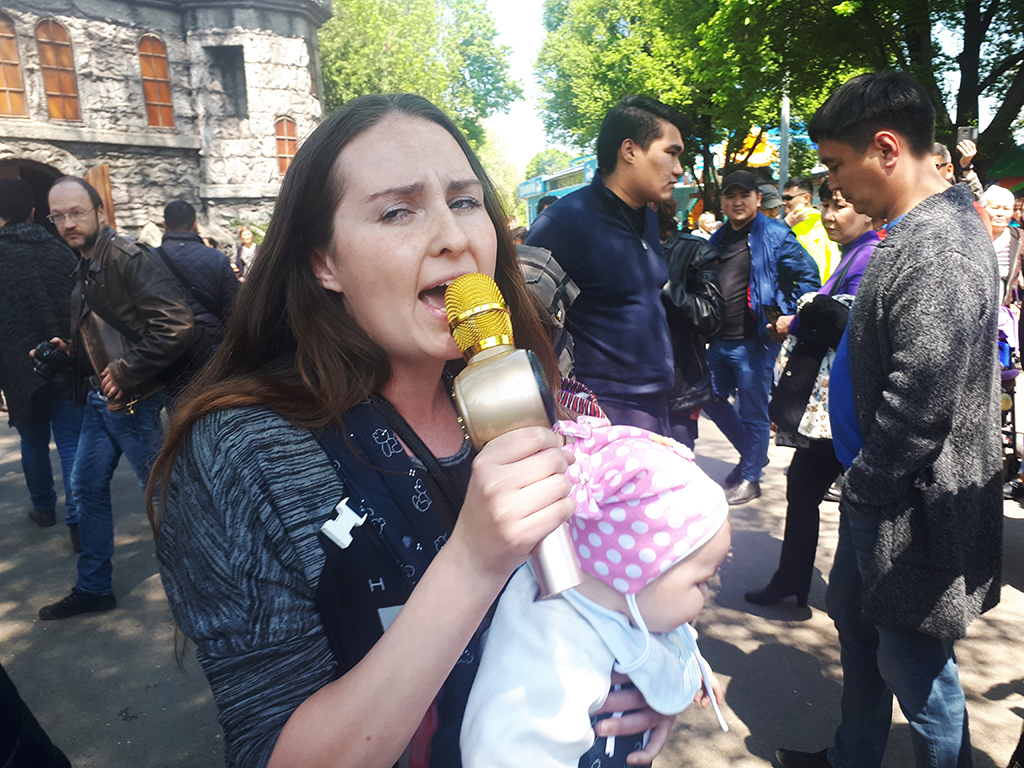 The Almaty rally was allowed to continue peacefully for four hours in what initially appeared an unusual show of leniency. Around 300 people were present at the peak of the gathering. While small in relative terms, this and other rallies going on elsewhere in the country at the same time represented the largest outpouring of discontent that Kazakhstan has seen since protests against land reform in 2016.

“Together we are strength! No to dictatorship!” the Almaty protesters chanted as they marched through the park, stopping for political declamations by speakers griping about anything from constraints on political freedoms to socioeconomic grievances.

They also shouted “Shal ket!” – Kazakh for “old man out” – reprising a favored protest slogan that nowadays reflects the conviction that although Nazarbayev has formally left office, he is still running the show from behind the scenes.

“We, the people of Kazakhstan are, to be honest, fed up with the regime and with what’s happening in Kazakhstan,” Darkhan Kеreyev, a 52-year-old protester, told Eurasianet. “We want democracy. We want freedom of speech. We never have democratic elections.”

Dilyara, a 15-year-old schoolgirl, attended the protest with her mother.

“We’ve come because we want change,” she said. In homage to the jailed Almaty activists, the girl had the words “you can’t run from the truth” scrawled on the back of her T-shirt in large black letters.

Eventually, police moved in to drag away peaceful demonstrators, as is customary.

The May 1 protests were ostensibly summoned by Europe-based regime gadfly and disgraced banker Mukhtar Ablyazov, who is wanted on various criminal charges by Kazakh authorities. It is difficult to ascertain, however, to what extent demonstrators came out in deference to Ablyazov or whether they were seizing a rare opportunity to register their anger against a government that has foreclosed all other avenues for dissent.

Some protesters who spoke to Eurasianet confessed to sharing Ablyazov’s views. Others said they were drawn to the protest by a yearning for change. And then there were those who tagged along out of a combination of curiosity and enthusiasm after stumbling across the demo in the park.

Many melted away after menacing-looking riot police slammed the park gates shut when protesters tried to leave to continue their march through the city.

The protest dwindled to around 50 people who refused entreaties by police, prosecutors and officials sent by Almaty city hall to disperse.

After initially appearing to break with tradition by standing back, police moved in to arrest at least a dozen people, who were manhandled into vans and driven away. They may be released with warnings, or tried and – if convicted – fined or jailed for up to 15 days.

Police in balaclavas in Nur-Sultan resorted to more robust measures, as seen in footage filmed by RFE/RL’s Kazakhstan service, wading into a crowd of demonstrators and beating them back with clubs. Dozens of people were reportedly detained there.

There were also preemptive arrests, with activists detained before the protests in case they planned to join.

The latest arrests continue the trend of zero tolerance for public protest long since set under Nazarbayev and perpetuated from the first days of Tokayev’s presidency, which began with the arrests of demonstrators.

As analyst Erica Marat wrote in a commentary for Eurasianet this week, the question of how to deal with public manifestations of dissent presents the new president with a dilemma.

“If public protests continue to dominate discussions on social media, they may become more frequent, more emotionally laden and involve more segments of the population. The government’s strategy – prevention and targeted arrests – may become ineffective. Tokayev will be faced with the option of banning protests altogether, like in Uzbekistan, or engaging with the protesting public and trying to respond to bottom-up requests.”

Joanna Lillis is a journalist based in Almaty and author of Dark Shadows: Inside the Secret World of Kazakhstan.