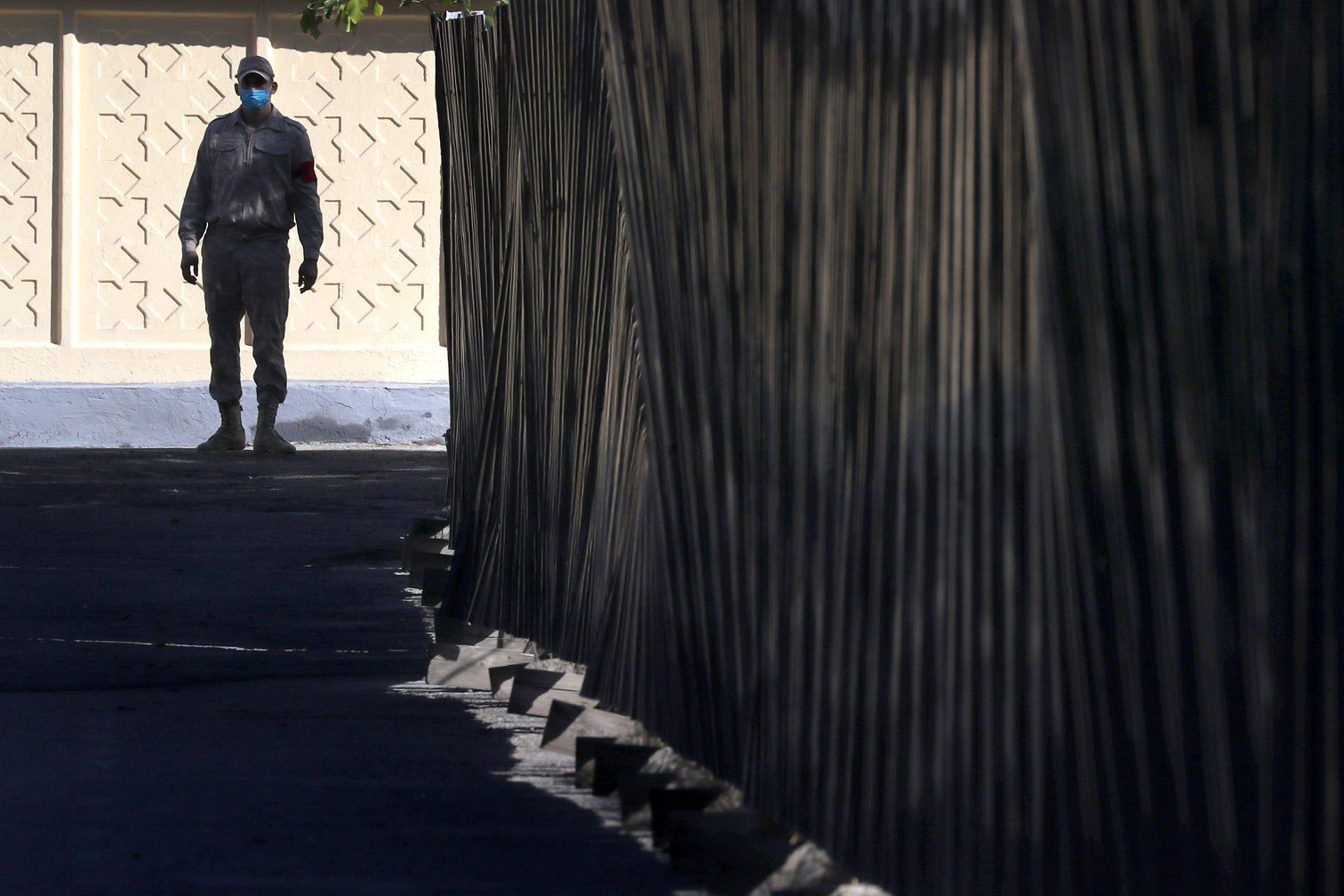 Amid anti-immigrant and anti-Muslim discourse, it seems that some refugees are more equal than others when it comes to seeking asylum in Europe

Khizbullo Shovalizoda was positive that Austria would be a safe place for him to express his dissent without fear of retribution, safe from the long reach of the Tajik authorities.

What the 28-year-old activist did not know, however, is that European countries are increasingly failing to honour the norms set out in the UN’s 1951 Refugee Convention, which for 70 years has served as a beacon of protection for refugees the world over.

Initially, the Austrian authorities seemed to observe the tradition of international protection in Shovalizoda’s case. They rejected an extradition request from Tajikistan, which is known for its authoritarian climate, following an investigation that showed the charges of extremism and terrorism brought against him were politically motivated. But then the Austrian Federal Office for Immigration and Asylum and the courts overruled this decision and denied Khizbullo protection.

The Austrian authorities deported him to Tajikistan in March 2020. Immediately upon his arrival at Dushanbe Airport, the Tajik prosecutor general issued a press release thanking Austria for its cooperation in “extraditing” an “extremist”.

In June that year, in a closed court session, which observers and family members were not allowed to attend, Shovalizoda was sentenced to 20 years in prison on extremism and treason charges.

Ironically, following the Tajik court decision, an Austrian court has now ruled that the deportation was illegal and that Shovalizoda should be returned to Austria and be granted asylum.

Asylum cases are not just numbers, they are human stories. With the rise of a strong anti-immigrant discourse in the European Union, the bloc’s agenda has shifted towards keeping asylum seekers away from its borders, as well as returning as many as possible to their countries of origin, under the misguided conviction that this will deter future arrivals. This has turned the EU’s land and sea borders into spaces of death and desperation.

Not all the same

A more devious form of exclusion has seeped into the asylum process in recent years, too, as asylum seekers are discriminated against according to nationality. Belarusian exiles escaping the Lukashenka regime’s crackdown on prolonged protests for the safety of Europe have been relatively lucky.

Yauheni took part in the massive wave of demonstrations following Belarus’s fraudulent presidential elections in August last year. Like many others, he found himself under pressure from law enforcement, and eventually left for Poland in October 2020 on a tourist visa. Yauheni applied for asylum in March 2021; his case is currently under review.

Uladzislau, a 28-year-old LGBTIQ activist, fled to Ukraine, where he was granted a humanitarian visa for Poland. Both volunteer at the Belarusian organisation Human Constanta, which provides legal support for refugees, migrants and stateless persons.

“We look European, like them. People here think we are culturally close, we are not Muslim, and that’s why they are more receptive and sympathetic to us”

Speaking to openDemocracy, Uladzislau and Yauheni discussed the numerous administrative hurdles they have encountered during their asylum procedure in Poland, such as the location of migration centres in remote areas, long hours waiting outside the migration office in harsh weather, and the difficulties in renewing their asylum identification papers after expiry. Both agreed, however, that their troubles were nothing compared to what other asylum seekers face.

By “others”, Uladzislau and Yauheni meant refugees from Central Asia, the Caucasus, Iraq and Afghanistan. “We understand why we have this privilege. We are white,” they said.

Yauheni added: “We look European, like them. People here think we are culturally close, we are not Muslim, and that’s why they are more receptive and sympathetic to us.”
By contrast, distrust and discrimination await “non-white” asylum seekers.

The case of Farhod Odinaev is emblematic. Before becoming an asylum seeker, Odinaev was a successful businessman in Moscow, where he had moved from Tajikistan in 2014. His mistake was to support the political opposition at home: he had joined the Islamic Renaissance Party of Tajikistan (IRPT), the country’s second largest party, in 2007. Following a wide-ranging campaign to discredit the IRPT in the run-up to the 2015 parliamentary elections, the party was banned and designated a terrorist organisation, followed by the mass arrests and persecution of its members, including those living abroad.

This is when Odinaev became a target. On the request of the Tajik authorities, he was arrested in Belarus in late 2019 as he travelled to Poland for a session of the Organisation for Security and Cooperation in Europe. He had planned to speak about the rights of migrants in the Russian Federation.

Pressure from prominent human rights organisations worked and Belarus freed Odinaev. Faced with charges of extremism, as well as leading and financing extremist organisations, he continued on his journey to Europe and applied for asylum on entering Germany. Despite a potential total prison term of almost 50 years in Tajikistan, his ordeal did not convince Germany to grant him and his family international protection.

In their denial, the German authorities stated that they did not recognise him as a refugee and that he did not qualify for refugee status in accordance with the 1951 Refugee Convention. They further stated that his fears of persecution were not credible and that he could safely return home. For now, Odinaev remains in Germany awaiting the outcome of his appeal against the deportation order.

Other cases remain in the balance. Hamid (name changed), a human rights lawyer, worked in Tajikistan and then with Central Asia migrants in Russia, helping them to obtain work permits and official residency papers. After one of his colleagues was abducted in Moscow and transferred to a prison in Dushanbe, Hamid began receiving phone calls and messages from Tajik security officials. They accused him, he said, of having ties to the opposition abroad. During one of the calls, an investigator told him that a criminal case had been opened against him for extremism.

Feeling unsafe in Russia, Hamid fled to Ukraine in the hope of reaching the Polish border to apply for asylum. He had heard from human rights colleagues in Europe and Belarus that this system had worked for Belarusian citizens.

A question of life and death

Aleksandra Chrzanowska, a legal expert at Poland’s Association for Legal Intervention, said that the inflow of asylum seekers from Belarus had shown her and her colleagues “how different the asylum procedure can be”.

Interviews for applicants from Belarus are often limited to written exchanges of questions, and they receive a positive answer in four to six months. While Polish rights defenders are very happy to see this happen, Chrzanowska explained, they attribute it, at least in part, to Belarusians being seen as “Slavic brethren” in Poland.

“We would be happy to see this treatment extended to all other refugees as well,” she said. “For example, we also know that there is a similarly difficult situation in Tajikistan. But procedures for Tajik claimants are much longer and more complicated, with a high rate of initial denials, which they must appeal, and the process can carry on for several months or even years.

“We see now that the system can act differently when there is a will.” Nasta Loiko from Human Constanta agrees with Chrzanowska’s analysis. She followed Odinaev’s case during his arrest in Belarus, and said that her organisation has been voicing concerns over discrimination against Muslim refugees in Europe for years. While Loiko is grateful to Europe for opening its doors to Belarusian exiles, she wishes the same treatment would be extended to non-white asylum seekers from different backgrounds, including Muslims.

Since 2015, the idea that the European Union is being overrun by people who use asylum as a cover to take advantage of Europe’s social benefits has taken root, not least because of unscrupulous politicians and the media, who often paint them as criminals and rapists. As a consequence, the treatment of Muslim refugees in European countries appears to have worsened. Instead of asylum, Muslims can expect deportation. At the end of August, German authorities deported eight asylum seekers back to Tajikistan; another group risks the same fate in the coming weeks.