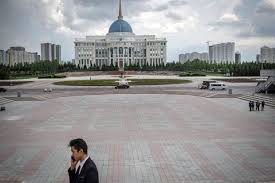 In a top-secret operation earlier this year, Kazakh counterintelligence officers swooped in on a Soviet-era apartment block and detained a senior government adviser on charges of spying for China.

Months later, the authorities did something unusual. They allowed information about the case to leak in local media, a rare instance of open push back against Beijing’s growing influence in Central Asia’s largest and richest country.

The arrest of Konstantin Syroyezhkin—a former Soviet KGB agent accused of passing classified documents to Chinese agents, according to people with knowledge of the investigation—comes as Kazakhstan’s leaders struggle to balance a hunger for Chinese investment with fears of encroachment by their giant eastern neighbor.

“By making this story public, the Kazakhs are sending China a message—not to get too bold in Kazakhstan or go too far,” said Vasily Kashin, a China expert at Moscow’s Higher School of Economics.

For decades after the breakup of the Soviet Union, Kazakhstan’s leaders have tried to juggle relationships with the West along with ties to their old paymasters in Moscow. But in recent years China has emerged as a new and powerful player in what is now a three-way balancing act.

Kazakhstan’s new president, Kassym-Jomart Tokayev, elected last month after being tapped by
longtime leaderNursultan Nazarbayev as his successor, has pledged to maintain the
equilibrium among Chinese, Russian and Western interests. Mr. Tokayev is fluent in Russian, Chinese and English. 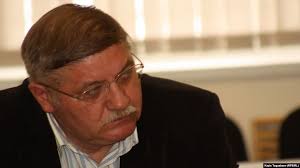 In a recent interview with The Wall Street Journal, Mr. Tokayev described China as an
important strategic partner. “We enjoy a very close relationship in the economic area,” he said.
“At the same time, we’re developing our political cooperation.

But the arrest of Mr. Syroyezhkin, one of the former Soviet Union’s foremost China experts, on espionage charges exposes Kazakhstan’s growing unease over China’s clout, and its deepening sense of vulnerability sitting at the crossroads of Asia.
The country stretches from China’s western border to the easternmost reaches of Europe. It was here that Chinese President Xi Jinping announced the launch of his country’s Belt and Road Initiative in 2013.
China was one of Kazakhstan’s top investors last year, and people close to the government say loans from Chinese state banks and lending institutions to the Kazakh state have skyrocketed to tens of billions of dollars.

But now Kazakh officials say China is trying to take advantage of those economic ties to boost its political influence, and they are trying to impose some boundaries.

The Kazakh Foreign Ministry has said China is an important partner in the Central Asian country’s attempt to balance relations with Russia and the West, but a spokesman wasn’t available to comment on whether China was taking advantage of its growing clout.

China’s Foreign Ministry didn’t immediately respond to a request for comment. “China’s presence in Kazakhstan, the investments they’re making, it’s become a divisive issue, and fears are growing that they’re getting too powerful,” said Ruslan Izimov, a China expert at the Institute of World Economics and Politics in the capital of Nur-Sultan, which advises the Kazakh government.

Among other things, Beijing recently lobbied Kazakhstan’s government to allow Chinese security contractors to operate in Kazakh territory, according to one person with knowledge of the negotiations, a thought anathema to the Kazakh security services.

In some instances, Chinese businessmen have demanded holdings in Kazakh companies to keep up the flow of loans for big projects, the same person said. It is unclear how the negotiations progressed.

China responded to the allegation that Mr. Syroyezhkin spied for Beijing by describing it as a “piece of news created out thin air,” a foreign ministry official said.

The U.S. presence in Central Asia has faded. Moscow has tried, with limited success, to counter Chinese economic influence by exercising its longstanding political ties to the former Soviet state, but even Russian officials privately say they feel their influence in Kazakhstan waning.

The case against Mr. Syroyezhkin could serve as a warning shot. It is likely to be popular in Kazakhstan, where analysts say anti-Chinese sentiment is growing among some parts of the population because of China’s harsh crackdown on Muslim Uighurs directly across the border in China’s northwestern Xinjiang region.

As many as a million Uighurs have been forced into re-education and labor camps, which doesn’t sit well with Kazakhs, many of whom share cultural, linguistic and religious ties with the Uighurs. Some ethnic Kazakhs have also been interned in the camps. Nationwide protests in 2016 forced the Kazakh government to abandon plans to sell land to Chinese.

“The government right now doesn’t want to publicize its ties with China, because it’s a sensitive issue,” said Mr. Izimov, the China expert at Kazakhstan’s Institute of World Economics and Politics. 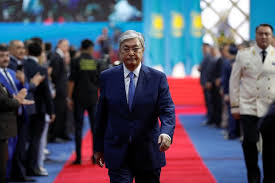 President Tokayev in his interview rejected suggestions that anti-Chinese sentiment was widespread, dismissing it as a relic of the past. Yet while commercial ties with China are flourishing, accounting for a 12% of Kazakhstan’s total trade and growing, a chill has slowed some of the larger state-backed Chinese-funded projects, including plans for a light-rail system in the capital. A separate $27 billion investment program between Chinese and Kazakh companies has all but collapsed.

The case against Mr. Syroyezhkin, who holds both Kazakh and Russian citizenship, threatens to strain relations further. He was arrested on Feb. 19 in his hometown, Almaty.

In his role as a top adviser on relations with China, he counseled Mr. Tokayev, who was then
prime minister, on negotiations with Chinese officials over the demarcation of the KazakhChinese border. Mr. Syroyezhkin has written extensively on China and was considered one of
the foremost experts on Beijing in the former Soviet Union.

Kazakhstan’s security agency couldn’t be reached for comment. Mr. Syroyezhkin and his
defense team also couldn’t be reached.China runs extensive espionage and intelligence-gathering operations across Asia, Europe and
the U.S., where Chinese agents have used offers of cash and other rewards to recruit Americans
to spy for them.

U.S. courts have convicted people of acting as agents for China, and Beijing has also run intelligence operations in Russia, a country it considers a strategic partner. In Russia and Kazakhstan, semiofficial Chinese think tanks play a role in reaching out to people viewed as potential assets, followed by requests for information and promises of cash.

“It’s a standard practice for them when working to recruit agents, and it works in Kazakhstan
as well as anywhere else,” said Mr. Kashin, the China expert at Moscow’s Higher School of
Economics.

Ann M. Simmons contributed to this article.
Write to Thomas Grove at This email address is being protected from spambots. You need JavaScript enabled to view it.
Corrections & Amplifications
An earlier version of a graphic that appeared with this article contained incorrect data on
Kazakhstan’s trade with China. (July 10, 2019)