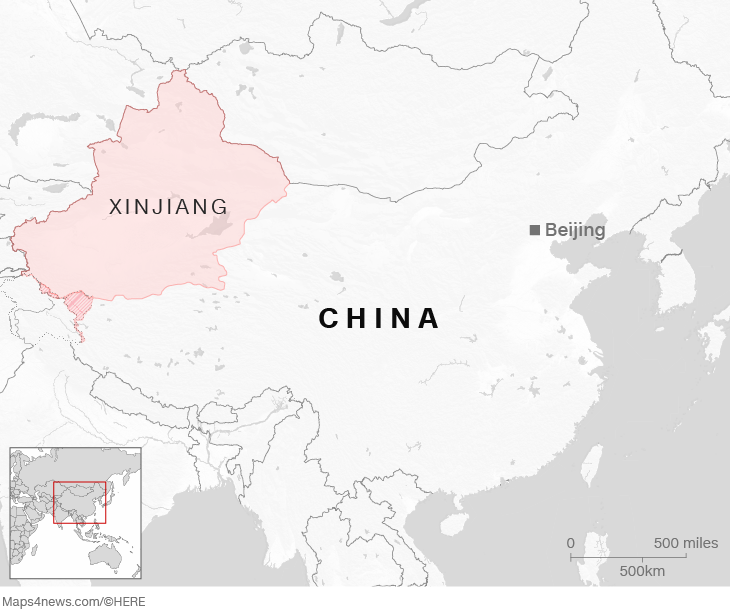 The United States is restricting 11 Chinese companies from buying American technology and other goods because it says they're linked to alleged human rights violations in Xinjiang.

The list compiled by the US Department of Commerce covers a range of companies, including biotech firms and those that manufacture wigs and home appliances. US authorities claim that several of them use "forced labor involving Uyghurs and other Muslim minority groups" in China's Xinjiang region. It accused others of connections to "genetic analyses used to further the repression" of those groups.

US Secretary of Commerce Wilbur Ross said in a statement Monday that the restrictions would ensure that US goods and tech are not used in "the Chinese Communist Party's despicable offensive against defenseless Muslim minority populations."
Washington did not detail which American companies do business with the sanctioned Chinese firms. But Apple (AAPL), Calvin Klein and Nike (NKE), among others, have all partnered with some of the companies included on the list, according to a report published in June by the Australian Strategic Policy Institute (ASPI). The report examined the use of Uyghur labor in China, claiming that those people are "working in factories that are in the supply chains of at least 83 well-known global brands in the technology, clothing and automotive sectors."
Tensions between the United States and China have been escalating for months as the two fight over trade and technology, leading to friction between companies that depend on a strong economic relationship between the world's biggest powers.
This is not the first time Washington has sanctioned Chinese companies over Xinjiang, either. Last October, the US government called out 28 Chinese companies, government offices and security bureaus over their alleged role in facilitating human rights abuses in Xinjiang.
China's western Xinjiang region is culturally and ethnically different from much of the rest of the country, with a large Turkish minority population, and has for years had an uneasy relationship with the government in Beijing.

The US State Department estimates that since 2015 as many as two million Muslim-majority Uyghurs and other Turkic minorities have been imprisoned in enormous re-education camps in Xinjiang, as part of a region wide crackdown by Beijing.

Chinese officials have long defended the crackdown in Xinjiang as necessary to tackle extremism and in line with Chinese law and international practice.
"The US abuses export control measures under the pretext of so-called human rights," Wang Wenbin, spokesperson for China's Ministry of Foreign Affairs, said Tuesday. "This violates the basic norms of international relations, interferes in China's internal affairs, and harms China's interests."
In recent weeks, Washington has also ramped up its efforts to sanction Chinese goods produced with forced labor.
On July 1, US Customs and Border Protection seized 13 tons of human hair in products originated from Xinjiang. A week later, the US Treasury Department announced sanctions against four Chinese Communist Party officials and the Xinjiang Public Security Bureau for human rights abuses against Uighur Muslims and other ethnic minorities in Xinjiang.