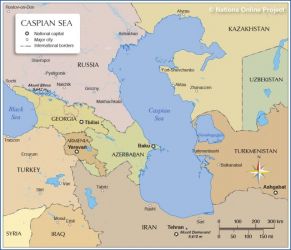 In a move presented as glorious and spectacular, oil companies from Russia (Rosneft), China (CNPC), Kazakhstan (Kazmunaygas), Azerbaijan (SOCAR) and Italy (Eni) have teamed up to form a consortium for the exploration and exploitation of what is expected to be a new “giant” located in the very heart of the northern Caspian tectonic structure.

The project, if successful and market demand to remain unchanged, should prolong the position of Kazakhstan as a global-scale oil supplier from 2040 till 2080. The Kazakhs are committed to contribute in the order of a billion greenbacks each year from now to the project. No overall picture of the total price tag has been presented so far.

Technical challenges presented by the project are unseen in the world history of oil. A publication by the consortium posted by the Eurobak magazine in Kazakhstan wrote that “According to foreign geologists, the Caspian Depression has significant crude hydrocarbons resources of about 40-50 billion tonnes of oil equivalent.” The project involves the drilling of an ultra-deep well, supposedly 14-15 km deep in the central area of the Caspian Depression. “The design depth of the proposed well Caspi-1 SPW is justified by the need in drilling up to the bottom of salt – 8.5 km; then up to the Devonian bottom – 13 km with further penetrating in the Pre-Devonian complex 1,000–2,000 m deep.”

What looks striking is the fact that all participants in the new consortium are state-controlled enterprises – Eni is majority private-owned but with around 37 per cent of the voting stock the Italian state holds a blocking vote and is the largest single shareholder, entitled to appoint the company’s president and several board members. The absence of the world’s leading private oil companies such as Royal Dutch Shell, Chevron, ExxonMobil, Total and BP is significant. As we reported a while ago, all of them are under threat of capital shortages as investors tend to shift from combustibles to renewables in the energy sector. This leads to the bizarre situation in which the private sector puts its foot on the brake when it comes to foolhardy adventures in the subsoil business. Given the global prices oscillating around $45 per barrel and after considering transport and huge lifting costs, the margin to recover investment and profit will be very small and certainly not attractive.

Little geology to know the chances

It takes a little geology to look for the rationales. The northern Caspian reserves are among the oldest and thereby deepest deposits that are open to exploration and exploitation. They were formed by dead plasma-bearing sediments which date from the Devonian and early Carboniferous ages and were put in place between 418 and 250 million years back in time. Between around 200 and 146 million years ago, during most of the Permian age, the first tectonic movements that isolated, or “sealed” the sediments’ accumulations from the atmosphere, occurred, which allowed the chemical process leading to the composition of oil, gas and coal to take place.

In the late Paleozoic era, the drying-up of the waters and its subterranean compression led to the formation of salt domes, which were to function as stabilisers for the oil and gas deep underground. The reason is that while the rock formations are excellent conductors which can carry power levels of up to 100 Ohm per metre of thickness, the salt domes are even much more highly resistive and can constrain up to 1,000 Ohm per metre. Together, they keep hydrocarbon reservoirs stable even under extreme pressures and temperatures, which in the case of the wider north-Caspian region tend to exceed 30,000 atmospheres and come close to 1,000 degrees Celsius respectively, both around one-third in excess of average pressures and temperatures in the middle parts of the earth crust.

A major bounty, a lurking nightmare

What is known as the “outer ring” of salt domes in the region includes the fields, currently under exploitation, of Bashkortostan and Tatarstan (in Russia) to the north, the oil province of Orenburg, and the oil, gas and (mostly) gas condensate in Kazakhstan to its south, and the Caspian fields of Emba, Tengiz and Kashagan. Shallow oil fields, located on top of the salt domes, have been under exploitation for more than a century and most of them near depletion. The big prize lies under the salt domes – along with the big hazards.

The “inner ring” is located under the northern Caspian Sea and its shore lands alone, and contains more than 1,200 salt domes varying in diameter between 3 and 50 kilometres. Like in the outer ring, the domes are connected with each other through “salt bridges”. Deposits both on top of them and below them have remained untouched. But what is being described as “technical challenge” by the consortium and its experts means a lurking nightmare for all who live in the already heavily contaminated area.

Temperatures and pressures in the deep deposits targeted by the consortium at least double those in the wells of the outer ring, already in operation. A blowout similar to that experienced in 1983 when well 35 exploded in the Tengiz field may repeat turning the site into a hot sizzling swamp, devastating for all that lives in a wide surrounding area.

The consortium has not uttered a word so far concerning protective measures and equipment to constrain such a disaster except general observations. There is no doubt that fear of criticism from environmental groups will reach the public domain soon. Here, accountants share a problem with environmentalists: is it worth, in financial and moral terms, to take such huge risks to pump up oil nobody may need in due time? For sure given the ongoing efforts and finance pouring in the exploitation and search of alternative and renewable energy sources there will be an excess of supply and the project may remain unfinished due to the lack of financial convenience. In the meantime, the ecological disaster will be completed, and billions of dollars wasted.