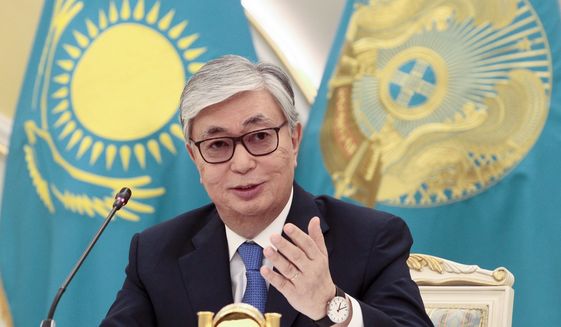 A torch has been passed from the only president Kazakhstan has had in the post-Soviet era to a hand-picked successor, putting Central Asia’s largest and most dominant country at a dramatic crossroads.

The historic question many are asking is whether their country, strategically wedged between Russia and China, will finally blossom toward democracy or follow the path of Russia and some other former Soviet republics to end up ruled by a corrupt oligarchy that siphons wealth from Kazakhstan’s vast oil, gas and mineral resources.

Kassym-Jomart Tokayev, a former United Nations diplomat, easily won Kazakhstan’s first-ever contested presidential election this month. The development allowed him to formally remove the word “interim” from the title he assumed in March, when longtime President Nursultan Nazarbayev stepped down.

The transition mainly has gone smoothly, but it is not without some bumps. In one way or another, Mr. Nazarbayev had ruled the Kazakh people since 1984, first as head of the Kazakh region in the Soviet Union, and then as the president who saw the newly independent nation through the Soviet Union’s early-1990s collapse.

The June 9 presidential vote was marred by protests in Almaty, Kazakhstan’s largest city, and in Nursultan, the capital, which was recently renamed from Astana in honor of the 78-year-old former president. At least 1,000 people were detained in connection with the protests.

All the while, many outside observers have expressed concern that Mr. Tokayev, 66, an internationally respected figure who was director general of the U.N. regional headquarters in Geneva for three years, could become only a figurehead if Mr. Nazarbayev holds on to power behind the scenes.

“We will not see any real changes until Nazarbayev is dead,” said Serik Medetbekov, the head of the Foreign Office of Opposition of Kazakhstan, a dissident group based in Germany.

Mr. Medetbekov, who has lived outside Kazakhstan since 1999, sent a letter in April to international investment bankers and investors warning of corruption in Kazakhstan, including charges of widespread bribery and cronyism.

Despite his skepticism, Mr. Medetbekov called the election “a huge step forward,” mostly because it represented “an awakening” for young Kazakhs.

It’s a view shared by Kazakh analysts, who saw the election as a turning point likely to determine whether Mr. Nazarbayev will ultimately be remembered as a Soviet-style strongman who refused to let go of power or the leader who shepherded the country from communism to democracy.

“These elections must ultimately be seen as successful in order for Nazarbayev to be seen as the central figure in modernizing Kazakhstan,” said Yerlan Sairov, a political scientist based in Nursultan. “It’s important for the government that the public and the world sees the elections as fair and transparent.”

Daniel Witt, president of the Washington-based International Tax and Investment Center who was in Kazakhstan as part of a team of election observers, praised the vote.

“By everything I’ve seen, these elections are being conducted very openly and fairly,” Mr. Witt said. “We spoke to opposition candidates and asked if they felt limited in what they could do, and they had no significant complaints. You don’t get a fully formed democratic system in place with one election, but this is a step in that direction.”

Mr. Tokayev, who represented the Nur Otan party that Mr. Nazarbayev founded, won nearly 71% of the vote in a seven-candidate field that included vocal Nazarbayev critic Amirzhan Kossanov. Mr. Kossanov finished a distant second with roughly 16% of the vote.

Mr. Tokayev has promised to continue with reforms started under Mr. Nazarbayev and has stressed his commitment to Kazakhstan’s long-term goal of becoming one of the world’s top 30 economies in per capita terms by 2050. That would require the country to become as wealthy in relative terms as Austria or Denmark are today, based on International Monetary Fund statistics.

Such statistics currently put Kazakhstan in the top 80, on par with Turkey, Chile or Romania.

Ruslan Dalenov, vice minister of finance, said Kazakhstan’s plan is to follow the growth path of Singapore. Despite being surrounded by dominant nations, Singapore excelled rapidly during the later decades of the last century after its founder and longtime leader stepped down voluntarily.

But the plans outlined by Mr. Dalenov are vague.

Regarding the election day protests, meanwhile, Mr. Tokayev said people had a right to voice their opposition but that it was important that the streets “do not become battlefields.”

Mr. Kossanov, the second-place finisher, has called for significant economic and social reforms but said none of it will be possible unless the move toward free elections gains strength and opposition parties have a more powerful voice in Kazakhstan.

The de facto opposition leader recently recognized Mr. Tokayev’s victory in a statement on social media. He also called for “a new wave of social activists, a new opposition, which will be able to participate in the struggle for power under new conditions.”