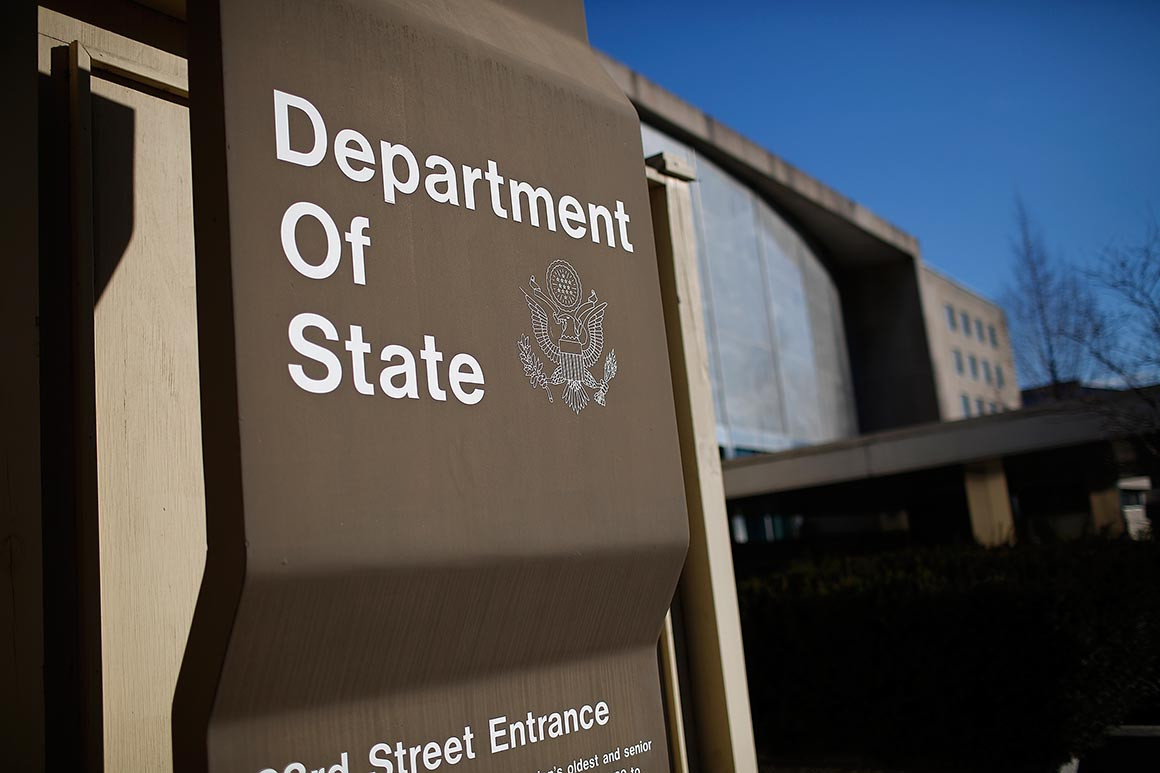 China, Iran and Russia are using the coronavirus crisis to launch a propaganda and disinformation onslaught against the United States, the State Department warns in a new report.

The three governments are pushing a host of matching messages: that the novel coronavirus is an American bioweapon, that the U.S. is scoring political points off the crisis, that the virus didn’t come from China, that U.S. troops spread it, that America’s sanctions are killing Iranians, that China’s response was great while the U.S.’ was negligent, that all three governments are managing the crisis well, and that the U.S. economy can't bear the toll of the virus.

The report, which is not public, was produced by the department’s Global Engagement Center — a fledgling office focused on the global information wars — and reviewed by POLITICO. It makes the case that propaganda and disinformation narratives from those country’s governments have converged as coronavirus has spread. And it says that while the three governments have pushed out the same messages in the past, the global pandemic has seen the convergence of their messaging accelerate.

Some of the disinformation is produced by state-run media outlets, and some has been put out by the governments themselves. A website run by Russia’s Defense Ministry, for instance, highlights the conspiracy theory that billionaire Bill Gates played a role in creating the virus.

Before the virus spread outside China, the report says, the overlap between the three governments’ messaging was fairly narrow: They all defended President Nicolás Maduro's government in Venezuela, which the U.S. and other Western powers do not recognize as legitimate; and argued the U.S. fails to uphold its commitments to international agreements.

But by February 2020, according to the report, the messaging began to converge. The report argues this came and accelerated as those governments have struggled to keep public opinion in their own countries on their side.

One core message has been that China is a strong global health leader and the United States, meanwhile, is a weak ally. Lea Gabrielle, who helms the GEC, told POLITICO that China has also let Russian propaganda efforts targeting the U.S. spread throughout its country — where the Beijing government’s internet censorship is notoriously relentless.

“What we saw as the health crisis started to come under control in China is that the CCP really started pushing a concerted effort to try to reshape that narrative,” she said, using the acronym for the Chinese Communist Party. “So in a short period of time the CCP went from letting Russian disinformation claiming the U.S. was the source of the virus proliferate in Chinese social media, to raising questions on state media about the origin’s source, to promoting disinformation that the U.S. was the source of the virus.”

The Chinese government’s messaging is both defensive and offensive, she said.

“At the same time, we saw Beijing unleashing a steady drumbeat of pro-PRC content across its global media networks and also from its overseas missions and that included increasingly vocal criticism of how democratic countries were responding to the crisis,” she said.

In response to a comment request, a Chinese Embassy spokesperson pointed to an interview between the Chinese ambassador to the U.S. and Axios on HBO. In the interview, the ambassador declined to explain why a spokesperson for China’s Ministry of Foreign Affairs promoted the claim the the U.S. was responsible for the virus. The spokesperson also flagged an interview the ambassador did with Ian Bremmer of Eurasia Group in which he intimated the United States is trying to take “political advantage of other people’s sufferings.”

A spokesperson for Iran’s mission to the United Nations said the U.S. is responsible for any propaganda or disinformation about the pandemic, not Iran.

“It seems, it became a part of the U.S.’s domestic campaign, and unfortunately the U.S. medias are full with stories of lies and disinformation spread by the administration in the lead up to the virus creating a tragic pandemic in almost every state in America,” the spokesperson emailed. “Blaming others for its own mistakes is a hallmark of this U.S. administration.”

A spokesperson for Russia’s Embassy in the U.S. flagged an embassy tweet claiming the country has not spread disinformation, as well as a Facebook post criticizing the Department of Defense for accusing Russia of disinformation efforts. “In these conditions, frantic #Russophobia persists in American mainstream media, obtaining inaccurate information from such a briefings by the Pentagon and the U.S. Department of State,” the post added.

The State Department report pointed to a March 10 article in the Global Times, a property of Chinese Communist Party mouthpiece People’s Daily. The article argued that China’s “image as a responsible world power has been further strengthened, rather than dented” by the pandemic. Two weeks later, the Iran-based Tasnim News Agency — which describes its mission as “[d]efending the Islamic Revolution against negative media propaganda campaign” — highlighted comments from the country’s top general thanking China for “humanitarian moves” related to the pandemic.

Who is helping fight the virus — and who isn’t — has been a core focus for governments and citizens around the world. On March 3, a media company controlled by Russia’s armed forces ZVEZDA ran a story headlined “Bill Gates, a secret laboratory and a conspiracy of pharmaceutical companies: who can benefit from coronavirus.”

The piece intimates that Gates had foreknowledge of the virus and claims that only people of “the Mongoloid race” can contract Covid-19.

There are many theories about the origin of coronavirus and the further development of events. The most popular one concerns the monstrous prediction of Microsoft CEO Bill Gates. Last year, he said that 33 million people could die from such a coronavirus in 250 days. The calculations are purely mathematical, but true, the IT tycoon is sure.
After such statements, adherents of conspiracy theories literally have no doubt that the virus is of artificial origin, and Bill Gates is one of its main sponsors. Another fact adds weight to this theory - a few months ago, the head of Microsoft held a conditional exercise called Event 201, which simulated an outbreak of a new virus that killed 65 million people in 18 months. The idea of the teachings is simple - globalization in the name of salvation.
It is noteworthy that the famous pharmaceutical giants and the Pentagon leadership participated in this theater of cruel cynicism.
The fact is that while the disease affects only the representatives of the Mongoloid race, such suspicious selectivity raises questions from experts.
In addition to flagging the Russian government's intimation that Gates may have been read in on the virus’ spread, the report cited material from all three governments calling coronavirus a U.S. bioweapon. It noted the infamous tweet from Chinese Ministry of Foreign Affairs spokesman Lijian Zhao touting an article claiming the novel coronavirus could have come from the U.S., as well as a Russia Today article highlighting a claim from the head of the Islamic Revolutionary Guard Corps that the virus could be an American bioweapon. The RT story noted that there’s “still no official proof” of that conspiracy theory.

Analysts outside the U.S. government are also tracking the global message wars. Camille Francois, chief innovation officer at network analysis firm Graphika, said her company has seen one of the major themes that the State Department report highlights.

“We have observed both public diplomacy and covert campaigns originating from Iran, China, and Russia converge around Covid-19 narratives, particularly in blaming the U.S. for its own response to the crisis and current role in geopolitical affairs,” she said.

And Joel Meyer of Predata, a predictive analytics firm with government and private sector clients, said its team has seen growing attention to narratives about Chinese and American foreign aid, as well as content about alternative medicine — two topics foreign governments are boosting. Instead of monitoring messaging that governments push out, Predata follows global internet traffic trends to see how the focuses of internet users shift, shrink and grow.

Of particular interest: dueling messages about whether the U.S. or China is a better ally.

“There’s a big increase in attention recently in Arabic language to Western foreign aid, interestingly, where there had been hardly any attention focused on that at all,” Meyer said. “It sticks out like a sore thumb.”

And since the pandemic’s start, Meyer said the firm has seen heightened interest from Hindi- and Persian-language internet users in websites that denigrate Western medicine and tout alternatives, including energy therapies and questionable supplements.

“In European languages, including French, German and Italian, anti-vaxxer attention has really spiked recently,” he said.

Meyer said this newly high interest correlates with reports of government disinformation on those topics.

“We’re seeing interest rise to unprecedented levels in alternative medicines and treatments,” he said. “So, from our analytics, we would look at that and say that type of disinformation is sinking in, it’s having an effect.”