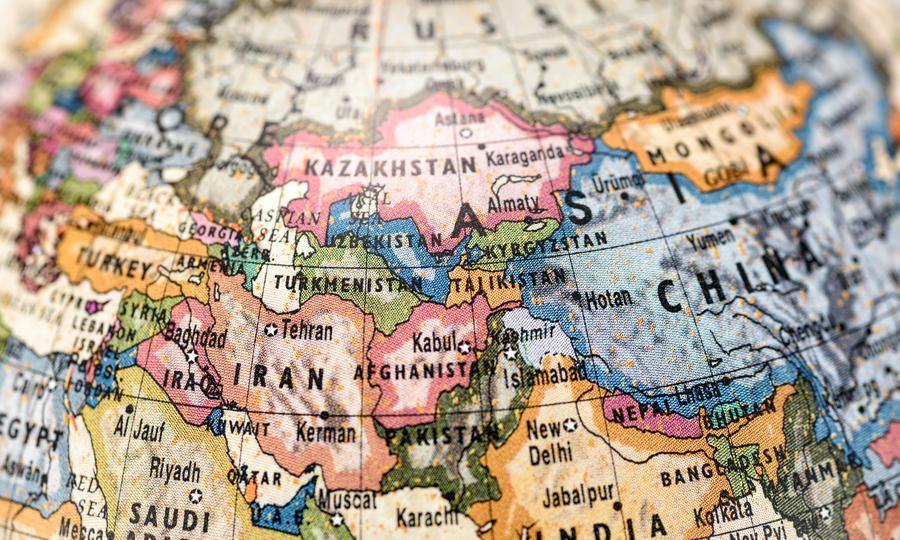 It is just a tiny grocery store in a decrepit, Khruschev-era five-story apartment block in Bishkek, the capital of Kyrgyzstan – but it is flooded with shoppers, 24 hours a day.

Located just off the busy Oruzbekov Street, surrounded by poplars and oaks, Dostyk ('Friendship') is run by Bakyt Akylbekov, a bearded, broad-shouldered man in his 60s. Bakyt has run the business since the Gorbachev era of the late 1980s green-lighted the first private stores.

From there, the proprietor witnessed the break-up of the Soviet Union, the Kyrghyz independence declaration, two coups, three popular revolts and a 'color revolution.'

Bakyt had rented the annex for decades – until the new owner wanted to renovate the entire property. That's when the Chinese showed up.

The "generous" Chinese offered to renovate the premises – as long as they could open a travel agency in Dostyk's wing.

Bakyt was helpless in the face of the "confident and arrogant Chinese with pockets full of money," he told Asia Times. He is bitter about these 'guests from the east' – and he is not alone.

The downside of investment

In September, Bishkek shopkeepers and farmers tried to protest. They were quickly dispersed by China-friendly authorities, while local media maintained a blackout of the event – for protest is not the official narrative of the Chinese influx.

That narrative was visible on October 1, when thousands of Chinese across Central Asia – not to mention many millions beyond – celebrated their National Day by organizing parades, concerts and festivals. One event, at Kyrghyz National University, included music, concerts and film screenings.

And at the 2nd Belt and Road Initiative (BRI) Forum that ran from April 25-27 in Beijing, Chinese and Central Asian leaders were all smiles. They talked about progress and development –and indeed, there are plentiful examples of major Chinese investments across the region.

No one mentioned simmering anti-China sentiment. But on the ground in the ‘Stans, that force is emerging in anger, protest – and violence.

Angst is fueled by multiple issues: unfulfilled hopes, debt traps, excessive deployment of Chinese capital and labor and a belief that Beijing is prioritizing its own interests.

Yet another bone of contention was Beijing's treatment of its Muslim minority in Xinjiang – a minority many Central Asians feel an ethnic and religious kinship with.

When, in 2017, the leaders of Kazakhstan, Kyrgyzstan and Uzbekistan arrived in Beijing for the BRI Summit, they hopefully presented long lists of potential projects to their hosts.

The Kyrgyz president talked about 'the importance of expanding fiber-optic communication lines from China to Europe via Kyrgyzstan, e-commerce and the creation of logistics centers.'

The Kazakh leader asked his Beijing hosts for technological and scientific development and agricultural assistance. And all three begged for the China-Kyrgyzstan-Uzbekistan railway to be integrated into the BRI, via connections to ports in Pakistan and Iran.

Two years later, none of these projects exist beyond paper – the wish lists represented wishful thinking.

The rail project has been stalled for years. Construction on pipe-line 'D,' which would have been the fourth in a network connecting Turkmenistan to China, via Uzbekistan, Kyrgyzstan and Tajikistan, was halted indefinitely earlier this year.

Take the planned light-rail system in the Kazakhstan capital Nur-Sultan – one of the most high-visibility Chinese projects in the country. It has been shelved, leaving concrete columns snaking through the capital as the only signs of a $1.9 billion rail system that was supposed to start operations in 2020.

China Development Bank halted lending last year after the collapse of the bank where the funds it had offered were deposited. Now Kazakh officials lament they have to borrow domestically to complete the project. In the meantime, glitzy, high-tech Nur-Sultan is left without a mass-transit system.

This points to the trend of Central Asian countries – formerly firmly under Moscow's control – increasingly gravitating toward cash-rich Beijing. Cheap and quick Chinese financing looks tempting – but it comes at a price. Many local politicians and journalists, who used to hail BRI's impact on the region, now talk of high-level corruption generated by the yuan.

They also talk of the so-called 'debt-trap' policy pursued by Beijing.

A 2018 report , published jointly by Nomura Research Institute and the IMF-affiliated Center for Global Development, or CGD, listed Kyrgyzstan and Tajikistan among eight countries which might be hit by 'debt distress.'

According to the report, China holds 41 % and 53 % of these countries' debt, respectively. Moreover, the CGD and Nomura found that 80% of the increase in Tajikistan's external debt from 2007 to 2016 is owed to China.

Kyrgyzstan owes a total of $4 billion in foreign debt – a heavy burden given an annual GDP of $7 billion. And unlike Kazakhstan, the mountainous Tajikistan and Kyrgyzstan are resource-poor and can't use energy to repay Beijing.

Roughly half of Tajikistan's $2.9 billion external debt – about $1.38 billion – is owed to China. The CGD estimates a higher number: 53% of Tajik debt is held by China.

Huge sums borrowed from Beijing have not only been used to build roads and tunnels: a new, $230 million parliament building is angering locals as a vanity project, and the largest theater in Central Asia is being built in the capital.

The country has been forced to offer Beijing assets to pay back $300 million in debt. Tajikistan has transferred ownership over a lucrative gold mine to Beijing.

In 2011, Tajikistan ceded land in exchange for debt relief . And in 2012, 1,500 Chinese farmers were bought in to cultivate rice on 2,000 hectares – significant space in a mountainous country where only 6% of land is farmable.

In synch with BRI, China's labor and capital is spilling into the capital-poor and underpopulated ‘Stans. This dynamic is inevitably engendering a belief that Beijing has a secret agenda – gradually taking over the vast steppes and mountains not only economically and culturally, but also via population influx – as happened in neighboring Xinjiang and Tibet.

Take the border-crossing/trade-and-shopping emporium of Khorgos, on the China-Kazkahstan border. Despite – in fact, because of – the popularity of Chinese shops and cheap goods there, many Kazakhs are suspicious and fear that their own shopkeepers are under threat.

There is outrage that Central Asian BRI projects largely use Chinese expatriate labor. This is especially the case in Kyrgyzstan, where the government has long been accused of downplaying Chinese labor migration.

Bishkek only recently admitted that more than 35,000 Chinese citizens arrived in the country in 2018 – most as construction workers on BRI projects.

Tajikistan has also kept silent on BRI Chinese labor migrant numbers. According to official data, only 6,500 Chinese migrant workers are there. Unofficial figures suggest that the number could have soared to 150,000.

In richer Kazakhstan, too, there's anger. Last year, according to some figures , more than 30,000 Chinese migrants came to Kazakhstan, many of them as construction workers on BRI-funded projects.

Matters have now moved beyond ill feeling to violence.

In January, Kyrgyz police detained more than a dozen people during the biggest anti-Chinese protests in the state so far. Protesters were demanding fewer work permits for Chinese workers, and the expulsion of illegal migrants.

And in August, about 500 villagers stormed into a mine operated by a Chinese company and assaulted Chinese workers, seriously injuring 20.

In September, similar protests kicked off in Kazakhstan's industrial town of Zhanaozen and spread to Almaty, Aqtobe, Shymkent and the capital, Nur-Sultan. There were even protests in the border emporium of Khorgos.

According to Interior Ministry reports , 57 people were detained on September 21, 2019. The Kazakh government has sought to stifle unrest by arresting prominent activists and ' anti-China protesters."

Brothers over the border

Yet another reason for discontent is Beijing's 'counter-extremism' policies in Xinjiang. The region is home to the largest Islamic community in China, and is believed to suffer heavy suppression.

Locals in all the Central Asian republics, bar Tajikistan, are Turkic and Muslim, so have a natural kinship with their ethnic brothers, both Uygur and Turkic, across the border.

Last December, Kyrgyz nationalist group Kyrk Choro protested outside the Chinese embassy over illegal Chinese migrants and the repression of ethnic Kyrgyz in China. Relatives of detainees protested on the streets of Biskek, appealing to the Kyrgyz president to intervene.

Bishkek responded that it could not interfere in Beijing's internal affairs.

There were more anti-Chinese rallies on January 7 and 17, when up to 500 Kyrgyz rallied to protest the persecution of Muslims in Xinjiang. The protesters demanded scrutiny of all Chinese-funded enterprises and Chinese loans, the deportation of illegal Chinese migrants and a halt to labor quotas for Chinese.

According to Uygur nationalist activists in Almaty, there are thousands of ethnic Turks in 're-education camps' in western China, including roughly 22,000 ethnic Kyrgyz.

And during the Khorgos protests, demonstrators not only protested Chinese investments, but also the imprisonment of Muslims in Xinjiang.

Out of almost 1.5 million ethnic Kazakhs in Xinjiang, a significant number have family links in Kazakhstan as a result of emigration to Kazakhstan, a process that took place throughout much of the 20th century but accelerated during China's Cultural Revolution.

It brought 'nearly one million Chinese Kazakhs back to their ancestral homeland,' said Alexei Kudoyarov, a Russian, Almaty-based journalist who has covered Central Asia for Russia-language media for more than 30 years.

But in recent years, 'China allowed only 2,000 ethnic Kazakhs to give up their Chinese citizenship and move permanently to Kazakhstan,' Kudoyarov said, as China increases suppresive policies.

Central Asia is a critical flank security for Western China. Kazakhstan, Tajikistan and Kyrgyzstan share a 3,300-kilometer border with China's Xinjiang region that is difficult to police, making these nations critical to stability in the restive region.

Even so, there are border disputes.

After the USSR's collapse, Central Asian republics inherited unresolved border disputes with China over more than 900,000 square kilometers. Kazakhstan's former President Nursultan Nazarbayev signed an agreement resolving the issue – but only for a tiny fraction of disputed land, and he was accused by critics of giving away Kazakh territory.

Other border disputes remain resolved, providing yet another element to the political-commercial-cultural-ethnic mix of issues simmering between China and the ‘Stans.

Currently, Central Asian governments seem to be keeping anti-Chinese sentiment in check. But with the region such a critical Eurasian stepping stone for BRI as a whole, Chinese financiers, investors and workers would be well advised to tread lightly to prevent local resentment becoming a real threat to Beijing's ambitious global agenda.