Kazakhstan is in the middle of a political transition. So is its social media humour. 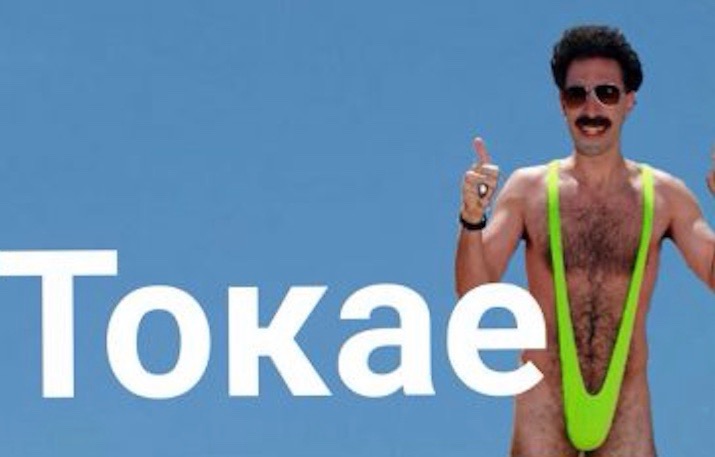 Fear is subsiding and the jokers are out in force
Just one of the many jokes at new President Kassym-Jomart Tokayev's expense. Widely shared.

Kassym-Jomart Tokayev is Kazakhstan's new president, at least in name. But he isn't getting the same treatment online as his much-glorified and constitutionally-protected predecessor.

Analysts had been tipping leader of three decades Nursultan Nazarbayev to initiate a succession process for years, but when Nazarbayev in March announced his resignation on state television, it still came as a surprise.

On June 12, just three days after winning a snap vote that witnessed the biggest protest the country had seen in years, Tokayev was inaugurated again.

Authorities are in a hurry. After three decades living under Nazarbayev, popular patience is at a low ebb. According to the interior ministry, 4,000 people were arrested between June 9 and 13. Nazarbayev's France-based political nemesis, Mukhtar Ablyazov, had called for protests during that period.

But it isn't just Ablyazov, a Voldemort-like figure in Kazakhstan's public discourse, that has been giving authorities sleepless nights.

On June 10, Rinat Zaitov, a hugely popular poet and musician called for the vote to be cancelled and announced his attention to start a party at an impromptu rally. He was subsequently detained.

Supporters secured his release but then proceeded to march unbidden around Kazakhstan's largest city Almaty, prompting a massive police response.

Then there were the observers of the vote.

Unprecedented numbers of local monitors signed up to oversee the election, signifying a civic awakening that wasn't noted during the elections Nazarbayev cruised through with landslides in the high nineties.

In many polling stations where observers were present the vote was a close fight between Tokayev and nominal opposition candidate Amirzhan Kosanov.

Yet the final count left Kosanov with just 16% and Tokayev with over 70%.

That Kosanov accepted these results and the legitimacy of the election unquestioningly after the announcement of a government-approved exit poll left many citizens feeling there hadn't really been an opposition candidate at all.

A bit of Borat to boot

Tokayev's victory had been assumed from the moment he said he would participate in the snap poll which he called in April, following “consultation with Elbasy”. Elbasy is Nazarbayev's constitutional title, which translates as ‘Leader of the Nation’.

But Tokayev lacks Nazarbayev's authority as well as special laws which have limited public criticism of the first president and his family.

For many, Tokayev is a stopgap figure — a notion that he has denied vociferously — and a figure of fun.

Jokes about him in the pre-election period included some comparing him to Borat, the central hero of Sacha Baron-Cohen's Kazakhstan-mocking cult film. Released in 2006, Borat was promptly banned in Kazakhstan.

But that didn't stop the stylish ‘V’ in Tokayev's campaign posters getting coopted by Borat's infamous “mankini”. 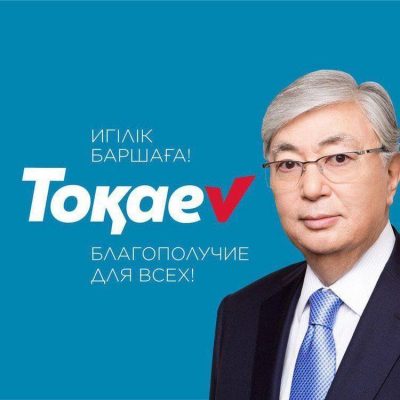 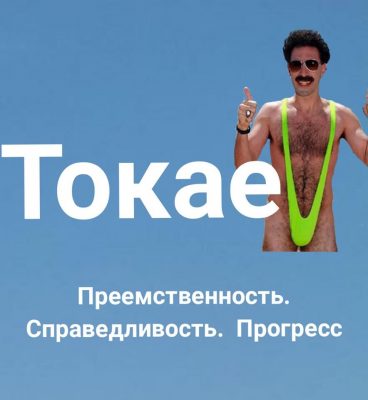 Accusations of plagiarism are common in Central Asian election campaigns. Tokayev's was no exception. Some wondered whether the all-important ‘v’ might have been stolen from the British supermarket chain, Savers, for instance. 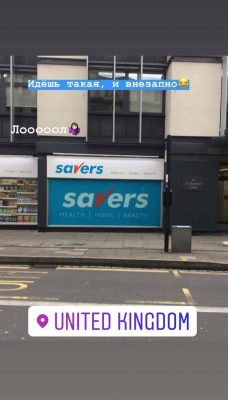 Former Senate head Tokayev arrived in the presidency by virtue of being constitutionally second in line at the time Nazarbayev resigned. 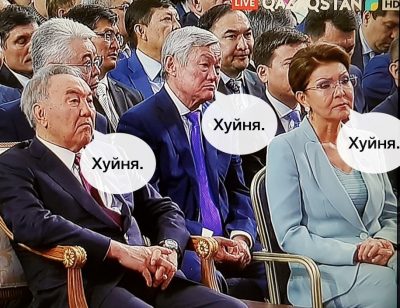 This has led to speculation that Tokayev has been shoved into a position of responsibility without power, and that he is now a prisoner of sorts.

Perceptions of Tokayev as a pitiful figure were enhanced during his inauguration, when many said that his ceremonial flag-kiss was redolent of nose-blowing. 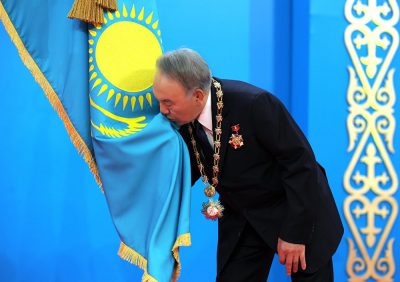 Nazarbayev appeared to get it right during his inauguration in 2015. 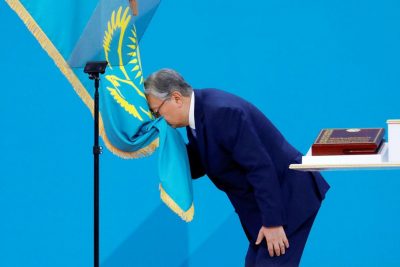 The nose-blowing emoticon was subsequently pinned to his inauguration photo on the Toqaev “sticker park” on Telegram. 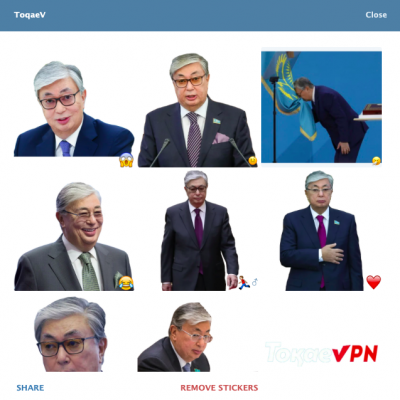 Tokayev has his own ‘stickerpark’ on the Telegram messenger app.

Lawyer Jokhar Utebekov wrote on Facebook that the flag kiss might best be understood as a “distress signal.” 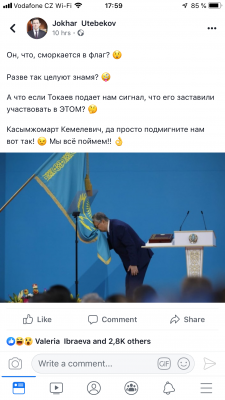 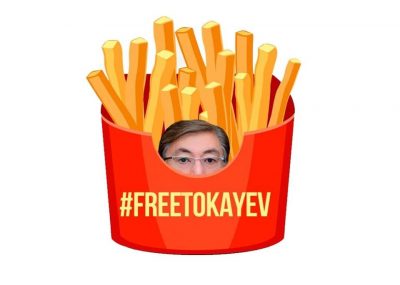 Spare a thought for the police

From detaining a pair of activists for holding up a banner at a public marathon to bundling hundreds into police vans on election day, police have been kept busy by Kazakhstan's transition.

Some of those taken off the streets on the days between June 9 and June 13 were merely passersby, including this bicyclist, a single father and wrestling trainer, who became something of a hero on social media.

But like its president, Kazakhstan's police state no longer inspires the same fear it used to. 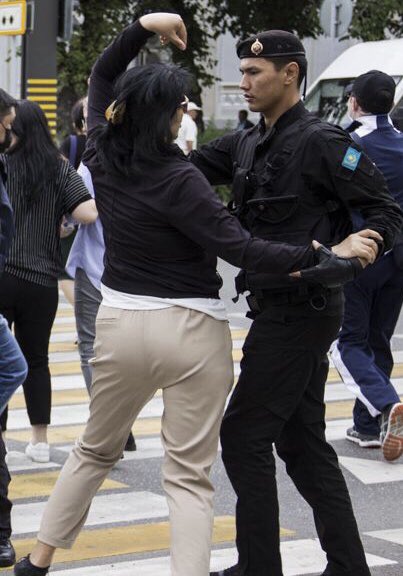 This gallant gentleman is politely inviting a lady to dance in the middle of the road. 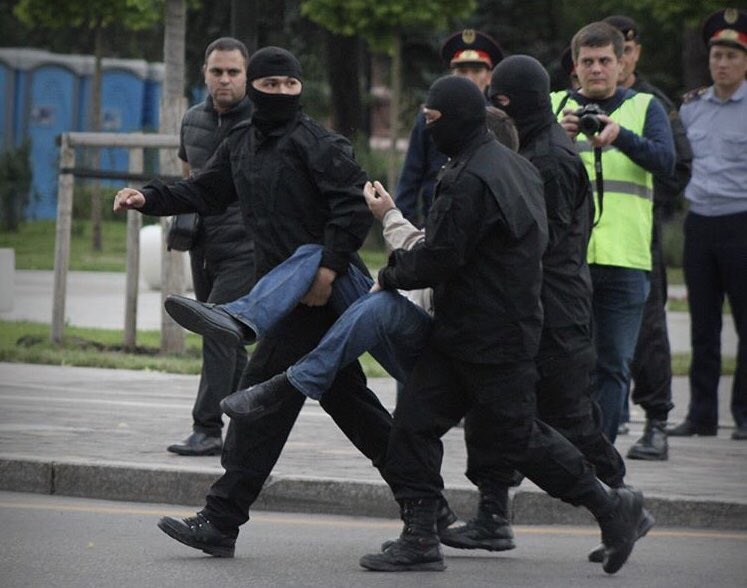 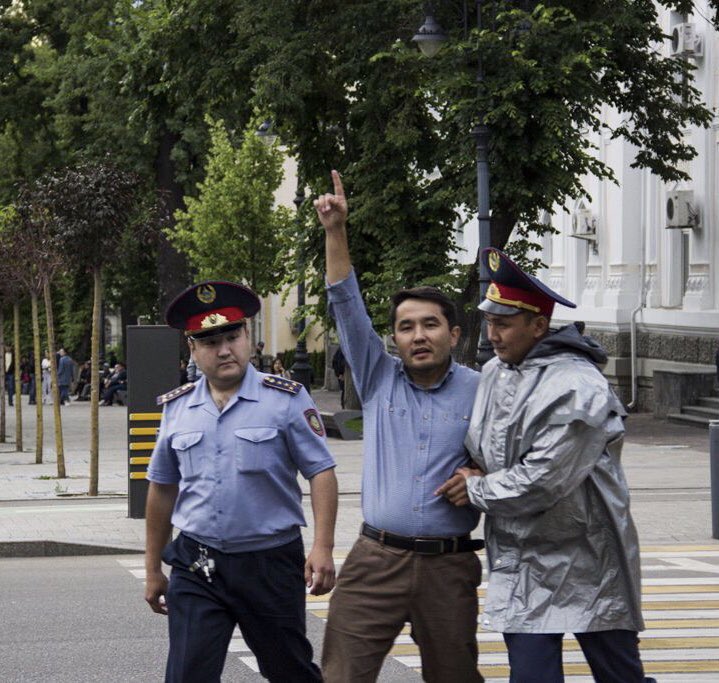 These faithful comrades are trying to help their drunk friend make it home, but he is demanding one more drink. 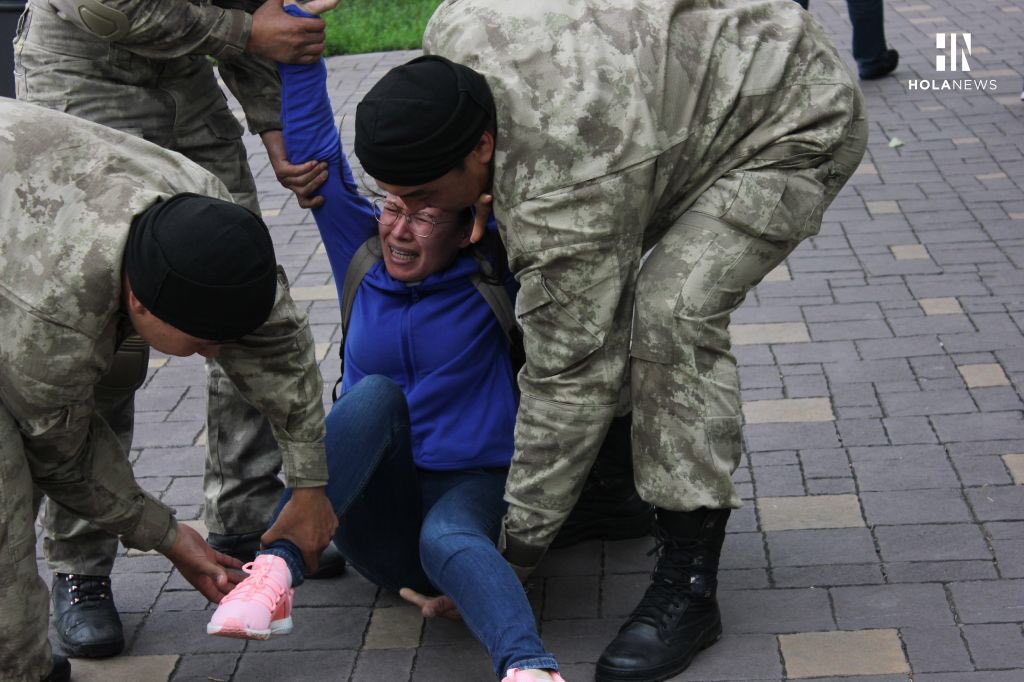 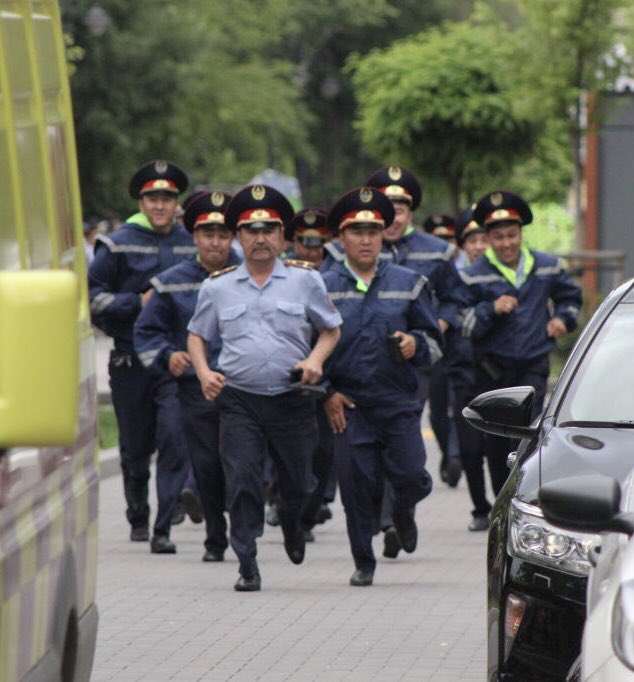 These healthy do-gooders have decided to go for a run in support of their movement.

Any theatre of the absurd needs its soundtrack. In the case of Kazakhstan's authoritarian transition, the song “I am dying in Nur-Sultan” fits perfectly.

Nur-Sultan is Kazakhstan's capital, which was previously known as Astana but was renamed in honour of Nursultan Nazarbayev shortly after Tokayev's first inauguration.

The ditty dreamed up by artists Opiya and Kisa v Kolose captures the sense of fatigue young people in particular feel about the ossified regime while also retaining the ironic humour which has lit up this period of political manoeuvring.

This is my oil, and this is my gas
Death is the only way here for us
The meaning of life — I couldn't find
Almaty smog be damned
Arrest me in the middle of the square
My meaningful words that no-one could hear
I will write down these words on my empty poster hanging on the bridge
My Elbasy, let me leave this paradise
I am dying in Nur-Sultan.