Two Kazakhs are due to appear in court in Austria in one of the country's most unusual murder trials. The men, who include a former intelligence chief, are accused of aiding the abduction and murder of two bankers in Kazakhstan in 2007.

The main suspect, Rakhat Aliyev, a former ambassador to Austria, was found hanged in a Vienna prison in February.

The case has kept lawyers, politicians and security services occupied for years.

More than 60 witnesses are set to testify at Vienna regional court, some via video link.

The case has largely focused on the death in custody of Rakhat Aliyev, a once powerful businessman-politician and former son-in-law of Kazakhstan's authoritarian president, Nursultan Nazarbayev.

The pair fell out in 2007, and Aliyev was sacked from his post as ambassador in Vienna and sentenced in absentia to 40 years in prison for organised crime and an attempted coup.

He said he was victimised because he had challenged the president's rule.

Austrian authorities refused two extradition requests by Kazakhstan and began their own investigations, issuing an arrest warrant last May.

Aliyev handed himself in and spent eight months in investigative custody until he was found hanged in his cell on 24 February. 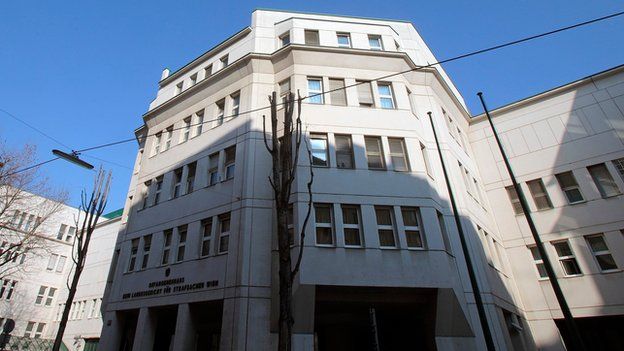 Initial tests suggested he had taken his own life, but his lawyers and family have vigorously challenged that account.

Further tests are expected into apparent traces of a sedative in his body.

The charges relate to the killing in 2007 of two managers of the Kazakh Nurbank, in which Rakhat Aliyev was a major shareholder.

Two of his associates are now at the centre of the trial: Alnur Mussayev, a former head of the Kazakh intelligence service, and Vadim Koshlyak, a former presidential bodyguard.

Vienna prosecutors allege that they helped Aliyev to hold the two managers against their will and force them under threat and physical abuse to hand over shares and property rights.

The two bankers' bodies were not found until May 2011, buried in lime-filled barrels on waste ground in Almaty. 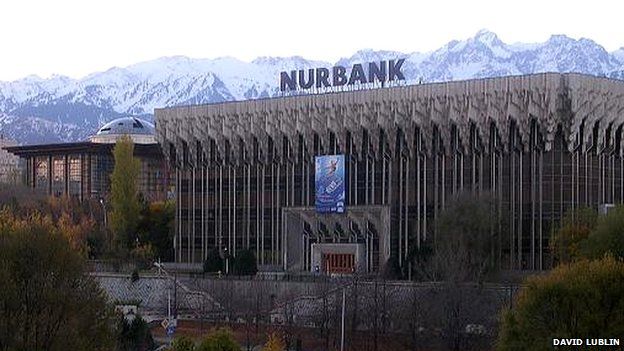 An advert for Kazakhstan's Nurbank on a building in Almaty

The long-running case has raised questions in Austria about the role of the Kazakh secret service, the KNB.

The KNB unsuccessfully tried to abduct the main suspects and the Austrian parliament investigated claims that it had tried to influence MPs and manipulate public opinion.

The case has also led to investigations against police, politicians and justice officials.