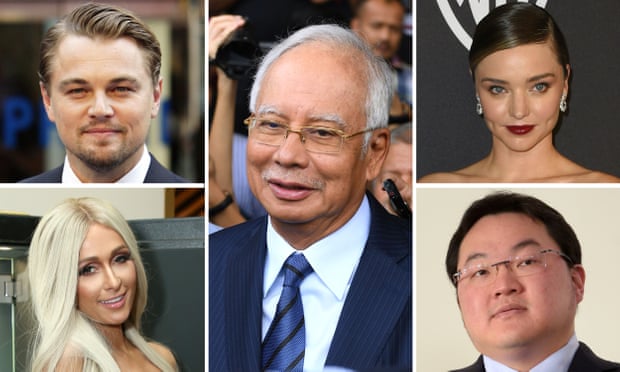 It is known as the “largest kleptocracy case in the world”, a tangled tale of Hollywood celebrities, Malaysian politicians, luxury yachts, Picasso paintings, power and mind-boggling amounts of stolen money.

On Tuesday the latest chapter begins in a corruption scandal that not only saw billions of dollars of Malaysian state money disappear, but also entangled Leonardo Di Caprio, Paris Hilton and Miranda Kerr; illicitly funded two Hollywood films and prime Manhattan real estate and dragged the reputation of one of the world’s biggest investment banks into the mud. In a Kuala Lumpur court, the former Malaysian prime minister Najib Razak will stand trial for his alleged role in the 1MDB saga and what prosecutors will say were elaborate attempts to cover it up.

Najib, who has consistently denied all charges, is the first ex-prime minister of Malaysia to face charges of corruption while in office. The anticipated airing of dirty political laundry in court over the next few months – in particular how Najib and his wife allegedly spent the millions of embezzled money – already has the country on tenterhooks.

“This trial is hugely important for Malaysia,” said Bridget Welsh, associate professor of political science at John Cabot University, who is an expert on Malaysian politics. “This is not just an issue of accountability, this is a huge international scandal which has really shamed Malaysia.”

The ramifications of the trial will be felt not just in Malaysia but globally; it was US attorney general Loretta Lynch who described 1MDB as “the largest kleptocracy case” in the world, and 1MDB investigations ongoing in 12 countries.

In the US, the justice department charged two former Goldman Sachs bankers with conspiring to launder billions of dollars embezzled from Malaysia’s state development fund.

“This trial involves not just Malaysia and Najib, this involves the whole global financial system and the people who gamed the system to their advantage,” added Welsh.

The 1MDB scandal began in 2009, when a newly sworn-in Najib set up and oversaw a government fund, titled 1Malaysia Development Berhad or 1MDB, whose intended purpose was helping attract foreign investment in Malaysia. Instead over the next five years, billions of dollars were either embezzled out of the country or laundered through subsidiary companies by those who ran it.

It is alleged about a quarter of the stolen funds ended up in Najib’s personal bank account, funding lavish credit card spending sprees by him and his wife, Rosmah Mansour. Even more extravagant was the spending by financier Jho Low, a friend of Najib’s stepson, Riza Aziz, who was an informal consultant on 1MDB. He allegedly siphoned billions from the fund, using it to buy vast amounts of prime Manhattan real estate, $8.1m worth of jewellery and a glass piano for Australian model Miranda Kerr, a Picasso painting and Oscar statuette for Leonardo Di Caprio, superyachts, and to throw ostentatious parties attended by the likes of Paris Hilton, Lindsay Lohan and Jamie Foxx. He even bankrolled Hollywood movie The Wolf of Wall Street.

“A number of corrupt 1MDB officials treated this public trust as a personal bank account,” Lynch said in 2016. International investigators now say at least $4.5bn was eventually stolen from 1MDB. An arrest warrant is out for Low – who went into hiding after Najib lost the election, many believe in China – and he has yet to be found by the Malaysian authorities.

It was British journalist Clare Rewcastle-Brown who first exposed the scandal in early 2015 on her website The Sarawak Report. Najib later organised an arrest warrant for Rewcastle-Brown, fired the attorney general who was investigating 1MDB, placed the damning report under the Official Secrets Act and removed all anti-corruption officers who were part of the investigation. A subsequent 1MDB probe, carried out under Najib’s watch and widely considered to be a farce, then cleared the prime minister of all charges.

For Rewcastle-Brown, the prospect of seeing Najib – who was in power for nine years before he was toppled in the election in May last year – on trial after so many years of being persecuted by his administration in her bid to expose 1MDB was “surreal”.

“It is quite something to see that it is he now in the dock, although I take no pleasure in his downfall,” she said. “It is a tribute to the power of public opinion, which Najib failed to judge.”

Even before it had reached the Malaysian high court, the revived 1MDB investigation, instigated by the new government as soon as they took power in May last year, already had the country gripped. Raids on Najib’s properties saw the police seize a cache of luxury goods worth up to $273m — including 1,400 necklaces, 567 designer handbags, 423 watches, 2,200 rings, 1,600 brooches and 14 tiaras — the biggest seizure of its kind in Malaysian history.

Subsequently, Najib was arrested on four separate occasions – the latest on Friday as he sat having an anniversary dinner with his wife. He faces a total of 42 charges relating to 1MDB, ranging from corruption and money laundering to abuse of power, taking illegal bribes and criminal breach of trust. His wife is facing 16 criminal charges. Both have pleaded not guilty to all counts and speaking after being arrested a second time in September last year, Najib told reporters: “I am not a thief … but I am happy because now I have the opportunity to clear my name on this issue once and for all.” If found guilty and given consecutive sentences, 65-year-old Najib could be facing years, if not a lifetime, behind bars.

Tuesday’s trial is the first of the three 1MDB-related trials that he is due to face and focuses on three charges of money laundering, three of criminal breach of trust and one of abuse of power relating to a sum of 42m Malaysian ringgit ($10m) which was transferred from a 1MDB subsidiary company, SRC International, into Najib’s personal bank accounts.

At a later date, he is due to face two more 1MDB trials, first relating to a sum of $681m, which Najib has maintained was a gift from a Saudi prince, and another on multiple charges of abuse of power. Separately from 1MDB, Najib is also due to face trial for charges relating to misappropriated funds from his party UMNO. He has pleaded not guilty to all charges.

Najib meanwhile has sought to recast himself as a victim of a politicised vendetta and paint the trial as a political hit job, embarking on a full-blown social media campaign, which recently saw him record a viral video of him singing 1970s hit Kiss and Say Goodbye, but with the lyrics altered to criticise the new government and protest his innocence.

Yet, Welsh was sceptical about how effective this charm offensive, which has also attempted to polarise the country along volatile ethnic lines, would be in shifting the court of public opinion in the former prime minister’s favour. “I think finally people will understand how much damage Najib has done to Malaysia.”